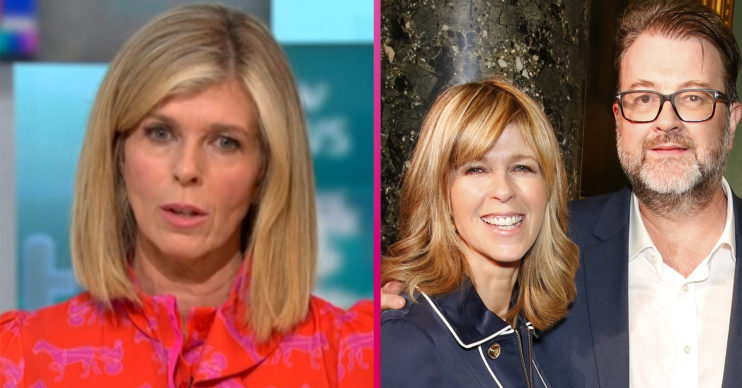 Kate's husband Derek has been in hospital since March

Kate Garraway will visit her husband Derek Draper today to read him anniversary card after she spent the special day without him.

Derek has been in hospital since March after battling coronavirus in a coma. However, despite being COVID free, his body is still trying to recover from the aftermath of the virus.

On Thursday (September 10), the presenter said it was her and Derek’s 15th wedding anniversary.

She said it was a “tough day” as she was unable to spend it with him.

However, on Friday’s Good Morning Britain, Kate explained she FaceTimed Derek and raised a drink to him at home with her family.

The presenter said: “We did our best to make it special. We had him on Facetime.

“My mum and dad are on childcare duties overnight while I’m here and they were there as well and we raised a glass and said happy anniversary.

“I have a card to take to read to him. It made me go through all the cards he’s written to me.

“He was a prolific card writer for birthdays and things. He’d always remember… And hopefully he’ll do it again.

“It will be strange reading to him, but this time I have made a bit more of an effort.”

We did our best to make it special. We had him on Facetime.

Meanwhile, yesterday, Kate said she hoped she could visit him.

She said: “I won’t be able to see him today, I kind of hoped I would but it wouldn’t work out that way for a visit…

“But maybe it would be a bit strange anyway.”

Kate continued: “So yeah, it’s a tough day but he’s still here. There’s not a huge amount of change.

“But you have to think, at least he’s here with you.

“You have a flicker and then a bad day but you have just got to keep going really.”

They have since had two children together, Darcy, 14 and William, 11.

Meanwhile, Kate recently revealed that Derek lost eight stone while he was in a coma.

The star told YOU Magazine: “When I finally got to FaceTime him, seeing him unconscious was a big shock.

“He’s lost nearly eight stone in weight, a lot of it muscle throughout his body.

“He looked worn-out, thin and pale with dark circles under his eyes and there were lots of tubes.”