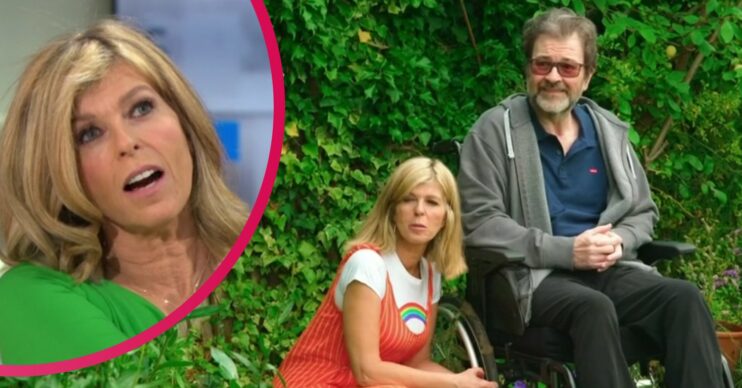 Derek has been recovering at home since his battle with COVID

Kate Garraway has revealed that her husband Derek Draper had to be carried around by production staff during the filming of their episode of Love Your Garden.

The 54-year-old presenter’s sad truth came as she talked about the special episode during Good Morning Britain today (Thursday, March 17).

Kate‘s confession about her husband Derek came during a chat about her episode of Love Your Garden earlier today.

The 53-year-old star and her husband, Derek, who has been seriously incapacitated by COVID, featured in a special episode of the show this week.

A clip from the end of the episode was shown on Good Morning Britain today. In the clip, Kate and Derek can be seen sitting in their garden.

“This is a project I did last year,” Kate said. “So that was actually Derek towards the end of last summer.”

She then went on to reveal that they still hadn’t had the lift for Derek installed when filming was taking place.

“We still hadn’t quite got the lift working to the garden so it did involve the entire Love Your Garden team having to carry him down the stairs, so big thanks to their muscle,” she said.

What else did Kate Garraway say about husband Derek?

Kate then went on to speak about how “special” it was to have Derek outdoors.

Derek had, of course, spent 13 months bed-bound battling COVID in hospital prior to his return home.

“It was amazing,” Kate said of getting her husband into the garden.

“Absolutely amazing. It was one of the things that when he was in the coma, I would say to him: ‘I am going to get you back into your chair in the garden.’

“It was wonderful to see it there,” she admitted.

What else has Kate been up to recently?

Kate’s confession about her husband Derek comes amid news that she’s taken a huge career move with ITV.

Just months after taking over from Piers Morgan on Life Stories, she has also landed another ITV show of her own.

The show will initially run for 22×60 minute episodes and will see Kate being joined by “friends and celebrities as she celebrates the weekend in style”.

Big Zuu, Katie Piper, and Vick Hope have also had new shows commissioned. These will air on Sunday mornings on ITV from this summer onwards.

You can catch Kate in Love Your Garden on ITV Hub now.