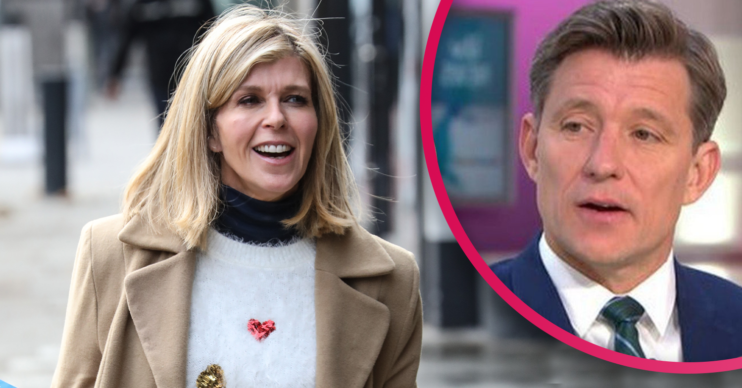 Kate has credited the Tipping Point host with helping to keep her strong while husband Derek Draper has been sick.

Derek, 53, has been hospitalised since March and continues to bravely battle the after-effects of coronavirus.

After taking some time off work, Kate returned earlier in the year and she’s remained strong ever since.

What did Kate say about Ben Shephard?

Viewers have wondered how Kate has kept so level-headed, and now the star has revealed the reason.

Kate says that her close friendship with Ben has been the cornerstone of her year.

“For 20 years, Ben has had to do so much for me, but this year has been another level,” she told OK!.

He has been at the end of the phone and trying to do everything that he can to help, it has been a huge pressure on him.

“He has been at the end of the phone and trying to do everything that he can to help, it has been a huge pressure on him.

“It’s a huge thing and I’m very grateful that he has been there and I’m aware how tough it’s been for him,” added the presenter.

What has Kate Garraway said about husband Derek Draper’s condition?

Last month, Kate offered an update to GMB viewers on her husband’s condition.

The mum of two revealed it had been a difficult week as Derek battled in intensive care.

Kate told viewers: “They’ve been unbelievably nice, and it’s been a bit of a tough old week for Derek so I haven’t got back to anybody.

“But it’s so lovely. I am constantly blown away by how lovely you’ve all been through this.”

In October, Kate also revealed that Derek had said his first words in 214 days.

She also told viewers that she was dreading the idea of spending Christmas without her hubby.

“I can feel my chest tightening at the thought of it, and the total panic at Darcey, Bill and myself on our own at Christmas unable to visit Derek because of restrictions, and that huge emotional hole.”

She added: “I don’t know how to fill it, without friends and grandparents to fill it.”