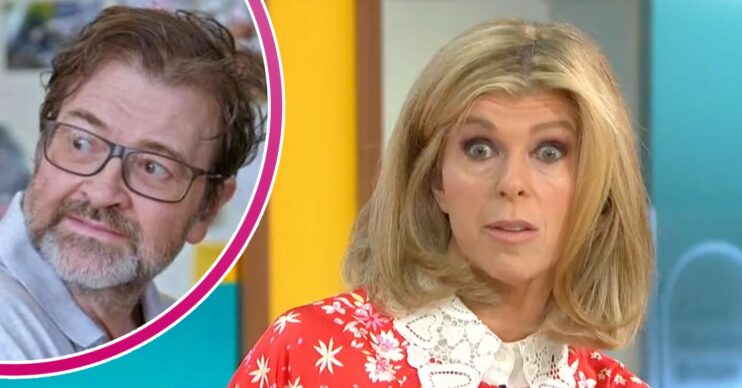 Derek is out of intensive care now

Kate Garraway has provided an update on her husband, Derek, after he was rushed to hospital two weeks ago after falling “seriously” ill.

On Good Morning Britain today, the 54-year-old presenter revealed the full details behind his “dramatic” hospitalisation, and the “new challenge” that faces them now.

Two weeks ago, Kate‘s husband, Derek, was rushed to hospital in a “very serious condition“.

Kate has been absent from hosting GMB to be at her husband’s bedside over the last couple of weeks.

Today, she finally returned to front the ITV morning show – and she provided fans with an update on how Derek is doing.

At the beginning of today’s show, speaking to Richard Madeley and the viewers at home, Kate revealed that Derek had developed a kidney infection.

This in turn had then led to dangerous complications.

Kate then went on to reveal that Derek contracted sepsis and is now at risk of losing one of his kidneys.

She explained that Derek had been in and out of hospital for a while before this incident.

“I got a phone call from the person who was looking after him saying: ‘Right, we’re really worried.’ I whizzed home and it just sort of went boom from there,” she said.

“We called an ambulance, went to A&E, where they said he had very severe sepsis, life-threatening sepsis.

“So it was really dramatic,” she continued.

Kate then explained that they needed to quickly identify the source of Derek’s infection.

She said that they quickly figured out that it was Derek’s kidneys which were the issue.

“Unfortunately, his kidneys were really badly infected, blocked,” she said.

“The challenge now is to save them. So that’s where we’ve been for the last three weeks,” she continued.

Kate then said that Derek is still in hospital waiting for his next procedure. However, he is no longer on the intensive care ward.

“One kidney is looking really good, just need to look at the other one. Still in high dependency,” she said.