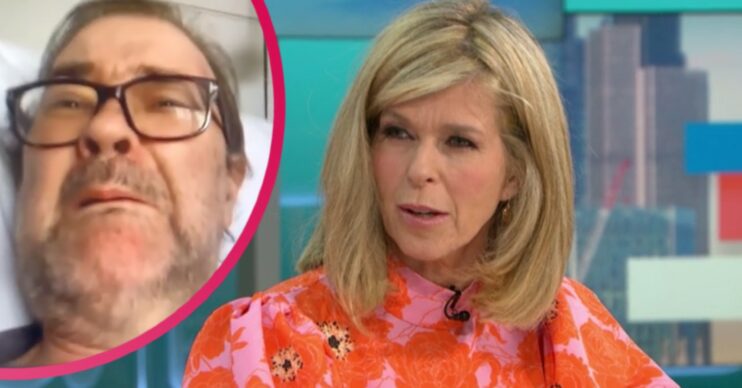 Derek returned home in April after one year in hospital

The 54-year-old presenter appeared on GMB today (July 9), as she issued a new update on the former lobbyist.

Derek returned home in April after battling coronavirus in hospital.

What did Kate Garraway say about her husband Derek?

Kate opened up on her husband as she hosted the show alongside Alastair Campbell.

Alastair started: “I know your old man incredibly well. Used to work with him, occasionally against him.”

We’re certainly not a long way out of the woods

Furthermore, the mum-of-two went on to discuss her husband’s ongoing health battle.

She added: “He’s alright, he’s alright. He’s very up and down, we’re certainly not a long way out of the woods.

“But being home has meant we’ve seen some things improved.”

Read more: Kate Garraway puts fears for husband aside as she flashes beaming smile while draped in England flag

In addition, Kate shared: “Definitely having the family around, having the children around has provided stimulation and I think the problem is you latch on to the positives, which is good because you have to.

“But there’s absolutely no doubt that there’s huge challenges ahead.”

Derek first contacted COVID in March 2020, before being taken into intensive care.

What’s the latest with Kate’s husband?

The 53-year-old author has since returned home after spending one year in hospital.

However, Kate recently revealed she was told by Derek’s neurologist that “there is very little chance of him making a meaningful recovery”.

She opened up about the neurologist – known as Dr W – in her book, The Power Of Hope.

She told him: “How long before you know more?

“Not how long will it take for him to recover, because you don’t know if he can even recover, but how long before you might know more?

“After another long pause, he looked straight at me, then away. ‘Well, Kate’ – the first time he had used my name – ‘I think it’s fair to say if he is still like this after two years we will know there is very little chance of him making any meaningful recovery.'”

Some positivity for Kate

Despite her husband’s health battle, Kate has continued to look after her children Darcey, 15, and Billy, 11.

Meanwhile, earlier this week, the GMB star shared a sweet clip as her son celebrated England’s victory against Denmark.

The video showed Billy draped in a giant England flag and falling after running across the house.

She captioned the video: “The final – actually a FINAL. Ps no celebrating 11 yr olds were hurt in the filming of this video. #euro2020.”