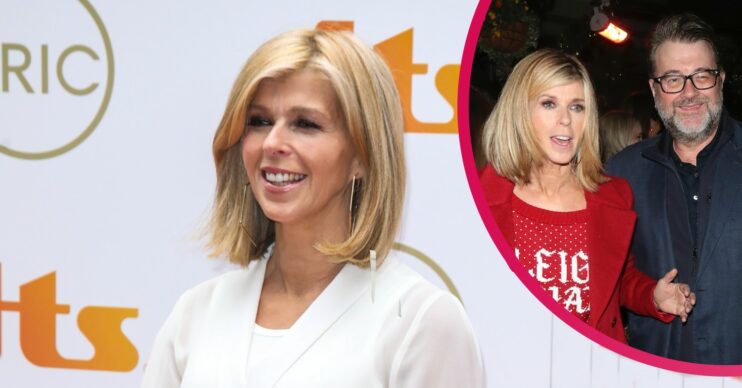 Kate said Derek still has a long recovery ahead

Fans of the presenter will know that Kate has been caring for Derek since arriving home in April, following a year-long stay in hospital.

‘He does get it, he does understand.’@kategarraway describes an incredible and heartwarming moment that happened with her husband Derek recently. She reflects on the last year and how far he’s come. pic.twitter.com/rUpRaa4loX

Derek contracted COVID-19 back in March 2020, right at the start of the pandemic.

She said that sometimes it’s like Derek is “not present” with you.

Kate continued: “Last Christmas Eve, we did have a lot of promise and a lot of hope. But Derek was in hospital.

“We had no idea whether he was going to live or die, praying that it was going in the right direction.

“A huge amount of gratitude for all the staff, the NHS teams that have kept him alive, and grateful that he was still alive as many other people have lost their life.”

Kate added: “And this year, of course, he’s home so we are spending Christmas together, and that is the biggest gift.

“It’s kind of hard to get your head around really. But we have still got fears. Still got a long, long way to go. And still hugely grateful for everyone that kept him alive and saved his life thus far.”

Fans of Kate can catch her on TV tonight, as she is appearing on Royal Carols: Together At Christmas.

The show, which is on ITV at 7.30pm, is hosted by the Duchess of Cambridge, Kate Middleton and pays tribute to everyone who has worked so hard during the pandemic.

Kate will do a special reading for the congregation at Westminster Abbey.

Earlier this month, the TV host revealed a touching gesture from the Duchess and her husband, Prince William.

Speaking to HELLO! Kate reflected on how the carol service was a “wonderful and emotional way to celebrate the start of Christmas”.

In the interview, Kate opened up about how the royal Kate was directly involved in her contribution to the event.

And she also made mention of how both Kate and William showed concern for her family.

Kate told the publication: “The Duchess had taken wonderful care and personally chosen all the readings, which had such a thoughtful theme of love and kindness.

“Both she and Prince William were kind enough to ask after Derek and the children. And as I was also lucky to be able to bring [son] William with me, he got the chance to see them too.”

Royal Carols: Together at Christmas airs tonight at 7.30pm on ITV.