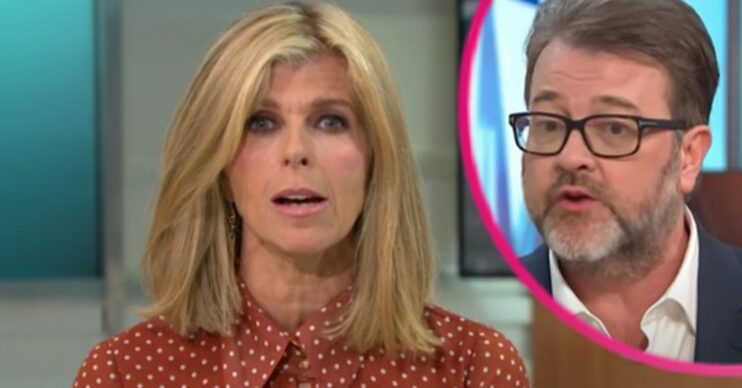 Kate Garraway has issued a ‘devastating’ update on her husband Derek Draper’s recovery.

The former lobbyist is currently battling the long-term effects of coronavirus, after returning home from hospital in April.

Speaking on Good Morning Britain today (September 2), Kate opened up on her husband’s condition and the challenges he still faces.

Kate Garraway shares an update on her husband Derek Draper

During the segment, Kate spoke to resident doctor Dr Hilary Jones about the severe damage that Covid can cause.

She shared: “It’s the vaccine that stops it being more damaging and I think people who have had it mildly are starting to argue it’s the same as flu – flu can be devastating to people as well.

“But this is very different because flu doesn’t give you this severe organ damage.”

Kate then went on to reveal that Derek suffers from extreme fatigue.

As a result, the dad-of-two can sleep up to 20 hours per day.

Kate added: “I mean, even when you look at some of the symptoms that people who have been double vaccinated suffer from – it’s fatigue.

“Now fatigue, I used to think, was just being exhausted by getting up in the morning. I know that he’s an extreme case because he’s got multiple organ challenges. Derek is sleeping 20 out of 24 hours a day.”

She went on: “He has 10 minute windows! And it’s not like he’s feeling a bit tired, he goes white, pale and it’s like everything shuts down.

“So you don’t want that kind of fatigue, even ruling out all the other things that people are suffering with so far.”

However, it isn’t all bad news for Kate.

The presenter recently returned from a family trip abroad with her children Darcey and Billy.

Kate ’emotional’ ahead of family holiday without Derek

Ahead of the trip, Kate opened up on her worry as they prepared to go on their first holiday abroad without Derek.

She said on GMB: “I had a busy day yesterday writing lots of lists and everything as Derek’s family are descending to take care of Derek for a few days while I take the kids away.

“I had a very tight window where I could get everybody to come and look after Derek so I could take the kids away. Obviously, he has nurses as well.

“Also, I could get somewhere where I could find friends to help us, as I think we’re all quite emotional, the three of us, about going away without him and whether that feels a bit strange to do.”