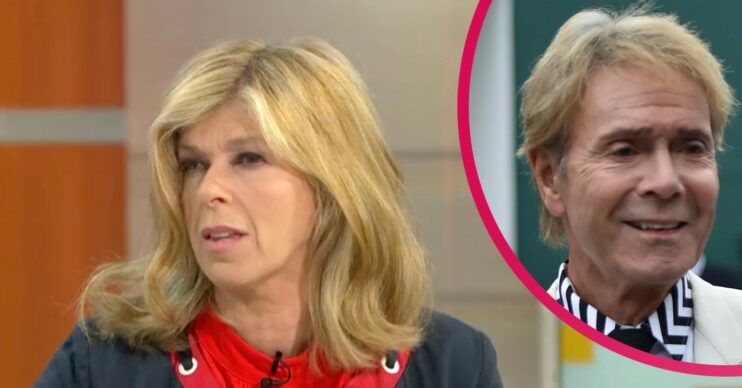 Kate Garraway revealed a secret “embarrassing” mishap that happened to her during the Platinum Jubilee celebrations.

The Good Morning Britain star had a moment to forget when she met Sir Cliff Richard at the Time of our Lives parade yesterday (Sunday, June 5).

Kate Garraway at the Platinum Jubilee

On Sunday, Kate was one of many national treasures who took part in the Queen’s Platinum Jubilee pageant.

The parade paid tribute to historic moments in British culture over the last 70 years.

However, as Kate revealed during today’s edition of Good Morning Britain, it didn’t go all smoothly for her.

The 55-year-old confessed that she lost her shoe – because of Sir Cliff Richard.

Along with Arlene Phillips, Kate spoke to Susanna Reid and Richard Madeley about the hilarious incident on this morning’s show.

Explaining what happened, Kate said that they had been told to wear sensible shoes for the day as there was going to be a lot of walking. Kate put some old trainers on.

“But there was a moment when we first arrived which by the way can I just say a personal moment of jubilation for me because there was a big sign saying National Treasures and we got to walk through it,” she said.

“We all gathered together and Sir Cliff Richard was there and I thought, ‘I’ve got my old trainers on, I feel embarrassed,'” she continued.

“So you chucked one away,” Susanna joked.

“I changed and then dropped it,” Kate said.

Kate wasn’t the only ITV star to be a part of the Platinum Jubilee pageant parade this weekend.

This Morning star Holly Willoughby was also at the parade – and she managed to anger some viewers at home.

Viewers claim that AJ Odudu “interrupted” Holly’s selfie-taking atop the bus – and Holly allegedly rolled her eyes at the presenter’s behaviour.

The eye-roll didn’t go down well with viewers, who said it reeked of “bad vibes”.

“Missed the eye-rolling when the reporter came to you whilst you were trying to take selfies hmmm,” one viewer tweeted.

“I spotted that too, didn’t like that to be honest – it gave off bad vibes,” another alleged.

However, some viewers were on Holly’s side. “Capturing the moment and history… I would have done the same,” one said.