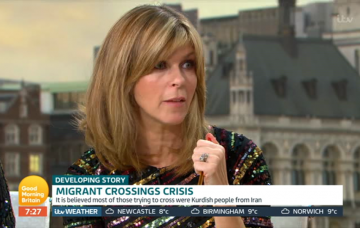 Kate grilled the guest on the growing crossings crisis

Kate Garraway clashed with a pro-migrant activist during an intense row over the growing crossings crisis on Monday’s Good Morning Britain.

The presenter spoke to Bridget Chapman and grilled her on what the government should be doing to stop migrants crossing the Channel.

It comes after figures stated over 220 people have attempted to cross the Channel to England since the start of November, which has been referred to as a “migrant crisis”.

However, Kent Refugee Action Network’s Bridget said she believes there isn’t a “migrant crisis” and began arguing her point.

Bridget Chapman has slammed the ‘appalling’ way the government has handled the influx of migrants and refugees crossing the English channel. pic.twitter.com/M0JChnAUN8

“The way the government is dealing with this issue is appalling. These people are in need and we need to be helping them.”

Kate said: “This is what people said about EU immigration and freedom of movement, they said, ‘Oh no people won’t want to come’ and then too many people did and it upset a lot of people.”

She continued: “These people have a right to seek asylum under the Geneva Convention, and they shouldn’t have to risk their lives to do that.

“Not everybody wants to come here. We need to clear about that. And I’d rather we didn’t call them migrants because these people are almost certainly going to have valid asylum claims. So they’re asylum seekers rather than migrants.”

“These are the practical problems. You’re looking at me and laughing, but this is what people feel.”

Bridget replied: “I’m not laughing. I can’t get a word in edgeways. It’s a false narrative by the media.”

Bridget said: “Listen, in the seventh biggest economy in the world we can afford to look after people who need it.”

Kate cut in: “How many?” to which Bridget replied: “I don’t know what the answer to that question is.

“What we need to be doing is stopping migration at source, and that’s what we’re doing for our international aid budget, over a billion pounds has been spent providing safe spaces near conflict zones.”

Bridget hit back: “That’s just ridiculous Charlie and you are being rude and that’s unnecessary. You are being irresponsible; you and your government have a moral crisis.”

What did you think of the debate? Leave us a comment on our Facebook page @EntertainmentDailyFix and let us know.