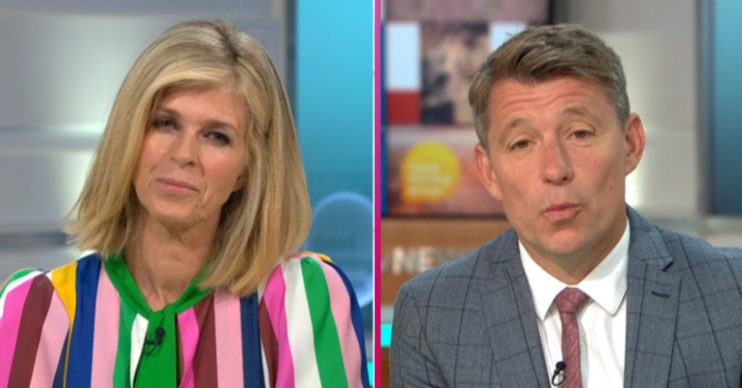 The pair were discussing star signs and the news that NASA reckon the stars have shifted and zodiac signs may be wrong.

Ben discovered that he is now considered an Ophiuchus, which is the snake bearer and for people born between November 29 and December 17.

Ben said: “I liked being a Sagittarius.

“Sagittarius – always ready to learn, have a spirit of independence, love the idea of finding freedom, you’re fun to be with, sexy without even trying…”

As he looked at the camera, Kate joked: “Hello…”

Kate said: “It’s okay though because you’re now Ophichus, which is passionate, a healer and flamboyant.”

Ben admitted: “I just think I’m sexy without even trying.”

Barry White’s I’m Gonna Love You Just a Little More Baby came on as a topless snap of Ben popped up on screen.

Kate said: “You really are sexy without trying.”

According to reports, the earth has slightly shifted on its axis and therefore the star signs have moved. So, the star sign you thought you were has changed.

For @benshephard, the shift means he has a new star sign – Ophiuchus.

As the camera cut back to Ben, the music stopped as he screwed up his face.

Kate said: “You did try quite hard for that, you worked out for six months and spray painted pecs on.”

I just think I’m sexy without even trying.

Meanwhile, earlier in the programme, Kate revealed Ben’s new star sign and he was very surprised.

Kate said: “NASA says the stars have shifted because we’ve slightly shifted on our axis.

“We’re actually a different horoscope and you particularly Ben, you are a brand new star sign called Ophiuchus.”

Ben asked: “Called esophagus?” to which Kate said: “No, Ophichus.”

Reading out Ben’s star reading, Kate said: “You can be a really super strong lover once your emotions are fully evolved.

“You’re not interested in short-term relationships, you’re flamboyant and expect people to be in awe of you and notice your presence.”