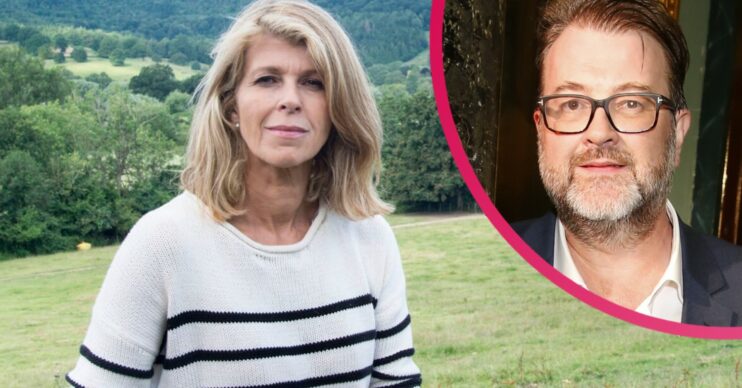 Kate Garraway has confessed that she felt guilty being away from her family while filming BBC Two series Walking With.

The show saw Kate go for a wander around the Cotswolds with just a camera attached to her and a drone.

As a result, she had to spend some time away from her family to film the show.

Opening up about the guilt she felt leaving her recovering husband at home with her kids, Kate said she initially felt like she “shouldn’t” have done it.

Kate Garraway feels ‘guilt’ when away from her family

“It was my first day without Derek and without Darcey and Billy,” she told her GMB co-stars, Ben Shephard and Susanna Reid, today.

“It was amazing and I felt guilty and that I shouldn’t be there.”

However, Kate eventually came round to the idea.

She revealed that, in the end, a day to spend with herself feeling centred ended up helping her mentally.

“I came back and felt incredibly refreshed,” she said. “It’s hugely healing. the wonderful thing about nature is that really kind of reminds you about the beauty of things.”

Despite her positive outlook, Kate’s trip did sadly end on a sour note when she began to suffer health issues.

“I actually wasn’t feeling that well after that, I found out I had a kidney infection,” she said. “But I didn’t know at the time so the BBC aren’t in any way responsible!”

She also recently added that the trip helped her realise that anything is possible.

How is Kate Garraway coping with Derek’s illness?

Meanwhile, Kate has been very open and honest about her struggle with her husband’s illness.

Derek was struck with COVID-19 last year and has been battling the after-effects of the virus ever since.

Speaking to The Mirror, Kate recently revealed that she has “moments of great loneliness and fear”.

She said: “I’ve had moments of great loneliness and fear. It’s hard because the person I wanted to give me a hug is the person that can’t – and that’s Derek.”

Head to our Facebook page @EntertainmentDailyFix and tell us if you tuned in to watch.