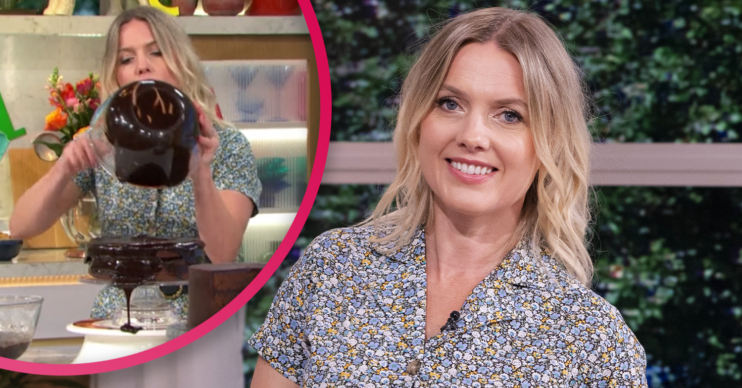 She was paying tribute to the film Matilda

Juliet Sear made a chocolate cake to celebrate 25 years of Matilda on This Morning today (August 4).

However, while the cake she made earlier looked delicious, viewers were all saying the same thing about the one she made live on air.

Juliet was on the show to recreate the chocolate cake that Bruce Bogtrotter was forced to eat in the film.

Host Eamonn Holmes told Juliet he didn’t even like chocolate cake but hers was “delicious”.

What happened with Juliet and the chocolate cake?

To say Juliet was a little rushed as she created her masterpiece was a bit of an understatement.

Midway through the recipe, This Morning host Ruth Langsford was heard to ask: “You’ve got a minute Juliet, is that long enough?”

With that, Juliet quipped: “Okay, I’m going to get my icing I made earlier and put it on the cake.”

It was then that disaster started to strike.

Read more: This Morning viewers are all making the same complaint about Rochelle Humes’ cooking segment

“Oh, you might want it to cool down a little bit more than that,” she said as she poured the warm icing on top of her cake.

“The nice thing is you don’t have to be neat,” she said, attempting to cover for her lack of time.

“Look I’ve made a right mess,” she then admitted.

“If it’s a bit cooler you’ll be able to spread it a bit better than me, but you get the gist,” she said.

To which she replied: “I’m supposed to be a professional!”

How did viewers react to the This Morning chocolate cake segment?

Before Juliet even started cooking one questioned how she’d make the cake in the allotted time.

“What IS the point of having someone on to show you how to make a chocolate cake when they are totally rushed and end up making a pig’s ear out of it?

“Why don’t they give the people cooking food more time? What’s the point if it’s rushed through?” said another.

“I know right. They always rush the cooking segment,” a third agreed.

“Why are they rushing this lady making the cake?” said another.

“They never give her much time,” another viewer commented.

So what did they think of the end result?

It didn’t seem like the cake made many viewers’ mouths water.

“The state of that one she made,” quipped one viewer.

“Juliet making a mess as usual… bless her,” said another.

So what did you think of the cooking segment? Tell us on our Facebook page @EntertainmentDailyFix.