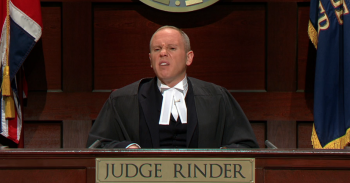 An appearance from Gogglebox’s Sandra Martin had Judge Rinder viewers baffled earlier this afternoon – but a meltdown from another character in court proved even more perplexing to those watching at home.

South London reality star Sandra, 57, turned up to support her pal who wanted to take action against James Alton for work she claimed she had completed and not been paid for, as well as a sum of money said to have been loaned to him.

James, however, insisted she had “sabotaged” a TV project he had been raising funds for and quibbled over whether the amount borrowed had indeed been a loan or a handout.

Nonetheless, all legal arguments quickly faded into the background – as did the novelty of Sandra being a prime witness – after James bawled his eyes out in front of a largely unsympathetic courtroom.

They weren’t the only ones. Viewers also cringed as he blamed “haters” for undermining him and blubbed hysterically before being encouraged to calm down.

However, the tears soon flowed again, leaving many observers on social media in stitches at the level of hysterical emotion on display.

“I was hating being poorly and having to watch daytime TV… then I put #judgerinder on 😂😂😂😂 literally howling,” said another, who may feel laughter is the best medicine.

A third commented: “Ok this is just turning into comedy gold now. #judgerinder.”

“Really struggling to keep a straight face watching this… #JudgeRinder,” added a fourth.

“Gonna be late to pick up my son from school cos I can’t stop watching #judgerinder 😂😂,” chuckled a fourth.

Judge Rinder ultimately awarded Sandra’s mate just over £100 after determining she had failed to prove a written agreement existed between her and James.

But among the bewildered but amused reactions from viewers, many others could not understand why Sandra – who at one point stressed the importance of contractual law, having “learned that since I’ve become famous” – was on hand for the ITV trial.

“Is that Sandra from #Gogglebox on #judgerinder or is it someone who proper looks like her 😂,” pondered a fan.

“Why is Sandra from Gogglebox on Judge Rinder pls wtf queen,” stated another.

Another joked: “This is a farce. What the hell is Gogglebox Sandra doing there? Hope she’s got a contract #judgerinder.”

Sandra, who also noted she insisted her granddaughter once sign a piece of paper when lending her £12, seemed to enjoy herself, though.

– Judge Rinder airs on ITV on weekdays at 2pm