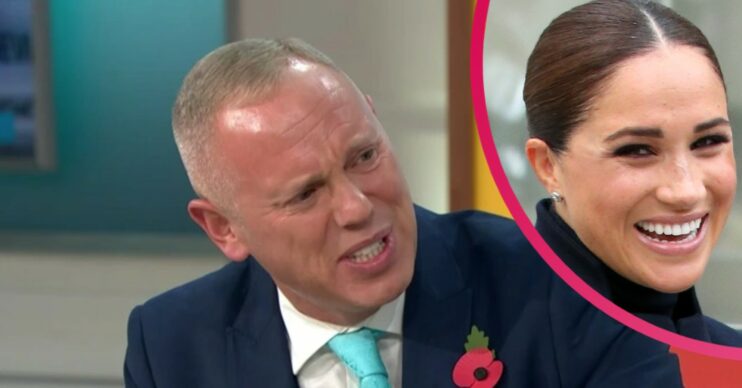 The ITV star insisted he still 'likes' the pair

Judge Rinder returned to GMB today and made his first act ripping into Prince Harry.

The ITV star made his comeback to the morning show on Wednesday (November 10).

He’s one of the guest stars filling in for GMB’s Richard Madeley, who has taken some time off to reportedly star in I’m A Celebrity later this month (November).

Judge Rinder, also known as Robert, isn’t known for mincing his words, and when Prince Harry became the topic of conversation he let his feelings be known.

The ITV judge hit out at the Duke and Duchess of Sussex after they slammed the British press again in US interviews.

Harry has claimed that Twitter bosses “never got back” to him after he warned the platform was being used to spread misinformation.

Meanwhile, Meghan labelled the British tabloids as “toxic” this week and said they should “come with a warning”.

As a result, Judge Rinder ripped into the pair this morning (November 10).

“Prince Harry! What? I don’t understand at all. I mean Prince Harry, with the greatest respect in the world, what qualifies him more than anyone else at all?” he said.

He went on to insist that despite bashing them, he does have a fondness for the pair.

Rob added: “I want to be clear, I like Meghan and Harry, her views might not be your cup of tea, fair enough.

“But my question is, if he’s worried about misinformation, what about the fact he and Meghan have taken a huge deal from Netflix and the misinformation about his late mother, Lady Diana, and they’ve taken millions of pounds.”

However, some viewers weren’t happy with Rob’s comments about the royal couple.

One person said: “Ffs #GMB leave Harry and Meghan alone,what is your obsession with them? Even Rinder joining in, just leave em alone.”

Another added: “Judge Rinder hits out at Prince Harry, a judge should be impartial and not pass judgement without a fair trial.”

A third tweeted: “@RobbieRinder why is everything Harry & Meghan say or do trashed? Please not you as well! Leave them alone!”

Another wrote to Rob on Twitter: “Thank goodness for your common sense about Prince Harry and Meghan!”

A third added regarding the discussion: “Great point from the lovely @RobbieRinder MBE!”