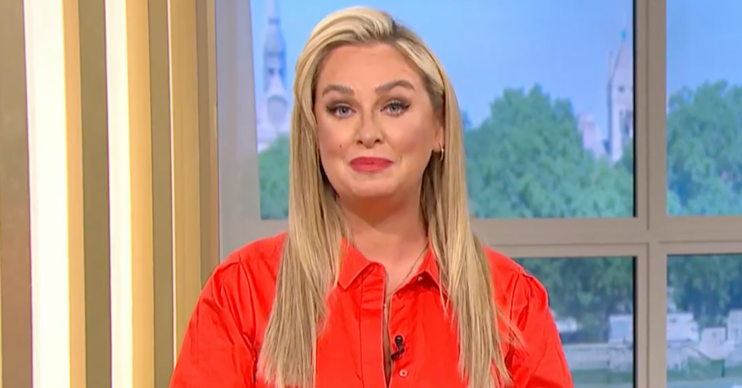 Another day, another hairdo!

Josie Gibson switched up her look again today to present This Morning.

And it’s left some fans of the show joking they’ll do a “poll” to guess what she’ll look like tomorrow!

Josie’s hair has garnered quite the attention as she presents the show alongside Craig Doyle this week.

On Monday, Josie wore her hair down and curly and she didn’t have a fringe.

Tuesday’s show then saw viewers question if This Morning host Josie was wearing a wig.

The comments came as she flashed a new fringe, prompting some to ask if she was wearing a hair piece.

And it appears fans are pretty divided over today’s look.

Josie wore a bright red dress with black belt as she hosted the show today.

One fan of the Bristolian presenter declared: “Josie suits red, she looks so good.”

However, others pointed to her ever-changing hair style.

“We should have a poll to see if we can guess what hair Josie will have tomorrow!” declared one giggling viewer.

In response, another viewer made a guess that it would be “blonde”.

Others, however, said she reminded them of a movie star – but not in a good way, it seems.

Today Josie wore her new fringe slicked back and slightly up and jokes were made that the style resembled Cameron Diaz’s look in There’s Something About Mary.

“Josie giving me Something About Mary vibes today,” joked one.

Josie giving me something about Mary vibes today #ThisMorning pic.twitter.com/b9wdVKFDcy

‘A natural look would suit her better’

However, not everyone was sold on Josie’s look today.

Earlier on in the week some viewers commented that they preferred Josie to look more natural on camera and pointed to her “heavy” make-up.

We should have a poll to see if we can guess what hair Josie will have tomorrow!

The same comments were posted on Twitter today, too.

One said: “Love Josie on This Morning but not fussed on the heavy make-up. She looks as if she’s on a night out. Sorry but I think a more natural look would suit her better.”

So what do you think? Tell us your thoughts on our Facebook page @EntertainmentDailyFix.