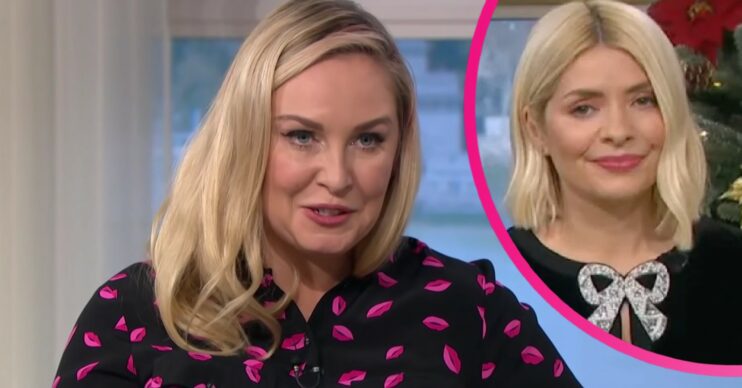 She previously stood in for the host last month

Josie Gibson has opened up on standing in for Holly Willoughby on This Morning.

The former Big Brother winner, 36, previously replaced Holly, 40, on the ITV programme after she fell ill with a nasty stomach bug.

Now, Josie has spoken out about the stint and how she felt standing next to show veteran Phillip Schofield.

Josie Gibson on This Morning

The star opened up on her hosting debut with Closer magazine.

She told the publication: “I made mistakes on air and sometimes my timing was off, but the viewers were so understanding.”

The mum-of-one added that she felt like an “imposter” during the stint.

However, the presenter credited co-host Phillip for helping her during her time on the blue sofa.

She concluded: “I was thrown in at the deep end but I had the best armbands I could’ve had.”

Josie previously shared a touching tribute to Phillip after her show stint.

She penned: “I’ve got to give it up for this hero [Phillip] you have been my rock this week. Not only have you presented the show but you’ve had to teach me along the way.

“Sorry for all the slip-ups, you and [Holly Willoughby] and all the other presenters make it look effortlessly easy.”

Josie went on: “You have made me laugh so much especially in the make-up room.

When is the star on This Morning next?

Meanwhile, Josie is set to return as host next week.

The star, who usually hosts the competition segments, will appear with Vernon Kay on Monday (December 13).

Holly announced the change as she hosted her final show with Phillip before Christmas.

Earlier today, she shared: “That’s it from us. We’ll be back with you at 10am on Christmas morning.

“Josie Gibson and Vernon Kay will be here to keep you company on Monday.”

Vernon and Rochelle Humes will take the reins between Tuesday and Thursday.