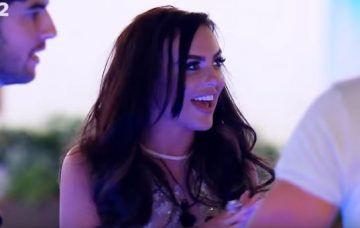 Jordan took to Instagram on Wednesday night to wish solicitor Rosie well as she entered the villa alongside fellow newbie Georgia Steel.

He shared an old photo of him and Rosie together with the caption: “Just to clear it up me & Rosie were together for 2 years.

“She’s one of the most hard working, funny and kindest people I’ve ever known & I was lucky enough to be with her.”

Jordan went on to assert: “She deserves to win Love Island and I’m so happy she’s got it, everyone get behind her!”

He added: “She will surprise you all!”

Well, the news Jordan and Rosie once dated was a surprise in itself to many fans!

Rosie, meanwhile, told The Sun before heading into the villa that her romance with Jordan happened around five years ago.

Rosie also admitted she hadn’t told Jordan she was applying for Love Island, joking it would no doubt be a shock to him when he found out!

Rosie entered the villa alongside actress and dancer Georgia on Wednesday, immediately causing sparks and catty comments to fly among the jealous girls.

The women were banished to the villa balcony and could only watch as the men hosted a drinks party for Rosie and Georgia and got to know them.

We’ll see what happened on those dates on Thursday night and whether Rosie and Georgia’s arrival will mean one of the other ladies is at risk of being dumped at the first recoupling!

Speaking about what kind of guy she’s attracted to, Rosie, 26, said: “I want someone who makes me laugh. I don’t like a boring guy who takes life too seriously. I like to experience all life has to offer, so I want someone that I can do that with. And then your typical nice body and nice eyes!”