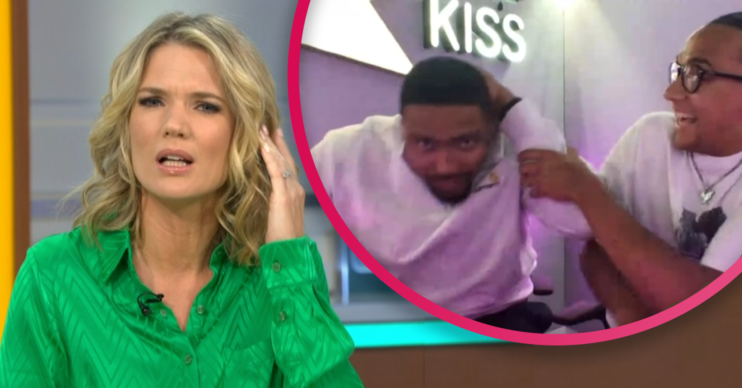 The Diversity star didn't get much sympathy from pal Perri Kiely

He and Diversity pal Perri Kiely were on the programme to promote their new breakfast radio show on Kiss FM.

The lads will be hosting the show every week day at 6am from Monday (August 3).

But as they tried to tell GMB viewers about what’s in store, poor Jordan whacked his head.

As he winced while putting bother hands around where he’d hurt it, Perri was in hysterics laughing at his pal.

“He’s hit his head,” the star giggled as Adil Ray and Charlotte Hawkins asked if he was okay.

Smiling, Jordan reassured everyone: “I”m fine. I just whacked my head on the table. Sorry.

Like Perri, those tuning in at home found the blunder hilarious and were quick to take to Twitter afterwards.

One wrote: “Hahahahaha @Jordan_Banjo head butting the desk on @GMB has made me chuckle!

“That alone has sold his and @perrikiely morning @KissFMUK Show to me no end!!! #creasing.”

Moments later, another tweeted: “When @Jordan_Banjo hit his head on the table during the GMB interview with @perrikiely but tried to keep cool, made my whole wee.”

He continued: “This is our plan, the breakfast show and smacking your head on the desk – that’s what the show show is going to be about.

“In all seriousness, we’ve been really fortunate in that me and Perri have a relationship you can’t learn or buy.

“We’ve grown up with each other , all of our experiences have been together so to have the opportunity to put that friendship on air and bring people into it.

“I think hat’s the main brief for us – whether you’re a caller or a huge star we’re interviewing, it’s going to be really fun to bring everyone to the same level.”

From Monday onwards, the boys revealed they will be waking up at 3am every day in order to be in the studio on time.

Perri had secretly been planning to wear his pyjamas to work due to the early call time, but he admitted those plans are now out of the window.

He joked: “If you could see this studio, there are cameras everywhere so there is no way I’m getting away with that.”