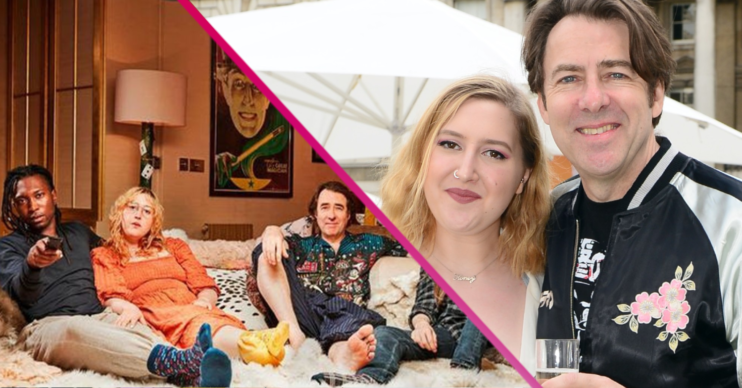 Jonathan Ross on Celebrity Gogglebox: Who is his daughter Honey? What did he say about her weight?

Jonathan Ross and his family feature on Celebrity Gogglebox tonight

Jonathan Ross is joined by his daughter Honey on Celebrity Gogglebox tonight (July 2), alongside her brother Harvey Kirby and boyfriend Zane Saz.

But who is Honey and what is she famous for?

The 24-year-old star regularly posts revealing photos and talks about the importance in feeling confident in your body.

The Celebrity Gogglebox star also hosts a podcast called Body Protest, where she talks to other women about their own relationship to body image.

However, the body positivity activist wasn’t always so confident in her own skin.

What has Honey Ross said about her parents?

Honey is the daughter of Jonathan Ross and screenwriter Jane Goldman, who co-wrote Kingsman: The Secret Service and X-Men: First Class.

The writer and Instagram star’s parents encouraged her diets as a teen, something she realises now is “toxic”.

Previously, she’s revealed how she struggled with her weight during her teens and was unhappy when her famous parents “tried to give her solutions” to her problem, which was to “lose weight”.

Speaking on Loose Women, she explained: “I have parents who were raised in the same society as all of us. They saw me, a teenage girl, coming home saying, I hate my body.

“[My parents] tried to give me solutions to a problem I brought to them, which was to lose weight. They presented me with diets and diets which, as we know, don’t work and are absolutely toxic.”

“My advice to parents is keep that as far away from your children as possible, if you want them to have a good relationship with food and their bodies growing up do not shame them.”

Honey has also spoke about how being the daughter of the famous couple meant she was unfairly judged for her body from a young age.

On Instagram, she shared how growing up in the public eye led her to think her body was a “problem to be solved”.

Although she had access to the glamorous world of red carpet events from a young age through her parents, it came at a cost.

“We live in the kind of world where I was body shamed by strangers on the internet at the age of 13, and was told the best thing to do would be to say nothing, crash diet and quietly hate myself. And I did – and I did it well,” she wrote.

“And it nearly killed me. And even when I got to a weight that people considered socially acceptable, I looked in the mirror and I still hated myself.”

She continued: “And that’s when I realised it wasn’t ever going to be about what I looked like. How you look means nothing when you can’t recognise or connect to what you feel like on the inside.”

Celebrity Gogglebox star Jonathan Ross: Does he have other kids?

Jonathan has also spoken out about how his kids have taught him to be “woke”. None more so than his Gogglebox co-star Honey.

Speaking on Loose Women in 2019, Jonathan said: “I learn a lot from her. I see a lot of things on her Instagram feed which, frankly, I wish I hadn’t seen. So I kind of know what the modern world is about.”