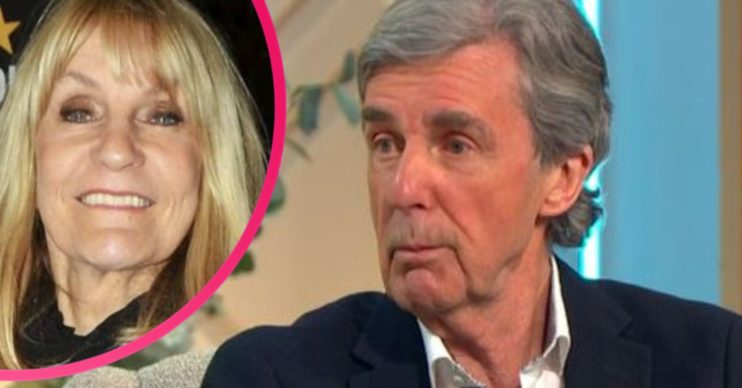 John Stapleton on death of wife Lynn: It’s been a ‘difficult year’

John Stapleton lost wife Lynn Faulds Wood a year ago and revealed on Lorraine today (April 29) that it’s been a pretty rough 12 months.

Lynn died in April last year after suffering a stroke.

She had battled ill health for a long time, and had been diagnosed with an autoimmune condition called sticky blood syndrome.

Since losing his best friend, John revealed to host Lorraine Kelly that things have been difficult.

“It’s been a difficult year, obviously,” he said.

“I’ve been helped enormously by my son Nick and his wife Lisa. And also friends, family and dear neighbours have been fantastic.

“It has been difficult for everybody, not just me this year, because of the pandemic.

John went on to talk about Lorraine’s No Butts campaign, which aims to get people talking about bowel cancer.

John explained: “30 years ago she was first diagnosed with bowel cancer and at that time bowel cancer was very much the Cinderella of the cancers in the UK.”

When Lynn was diagnosed, neither of us really knew what bowel cancer was. And once she’d been diagnosed and had the operation she said: ‘I’m going to change this.’

“There was very little talked about, there was not much money put towards campaigning about it.

“When Lynn was diagnosed, neither of us really knew what bowel cancer was. And once she’d been diagnosed and had the operation she said: ‘I’m going to change this.’

“She talked to a lot of doctors and they came up with this evidence-based list of symptoms, which the Department of Health at last accepted.”

A clearly emotional Lorraine went on to express her admiration for John’s late wife and the campaign.

She said: “But we’re standing on the shoulders of a giant. We’re just following what she did. We can’t quantify how many people she saved, but it’s got to be a lot of people.

“I can’t believe she talked to Prince Charles about poo!”

Read more: Lorraine Kelly hits back at trolls who call her out over ‘snub’

John added: “She persuaded Prince Charles to come along to the old ITV building… and Prince Charles talked about bottoms and poo, which must’ve been some kind of royal first, in public at least!

“Lynn managed it brilliantly for four years, but in the end it got her. It’s the same story as bowel cancer, not enough people know about it, even now.

“Not enough doctors and nurses know about the symptoms and that’s one of the issues she was out campaigning about right until the end of her days.

“All the people we saw did their best, but we need information.”

How long were John and how wife Lynn married?

They presented Watchdog together in the late 80s and early 90s, and Lynn was also known for programmes such as World In Action and Watchdog Test House.