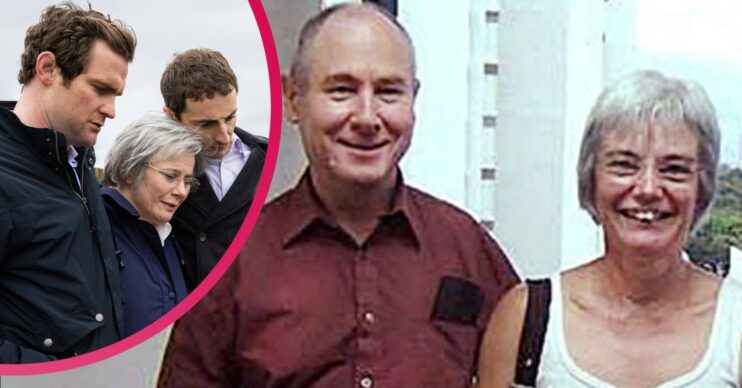 John Darwin: Did his sons Mark and Anthony ever forgive him and mum Anne?

Or did they disown their parents for good?

John Darwin’s crimes were made more abhorrent because of the fact he lied to his sons.

The serial charlatan faked his own death, leaving his sons devastated by the loss.

But in reality, dad John was alive and seconds away from his family home.

So did John Darwin’s sons Mark and Anthony ever forgive their mum and dad for the deceit?

Or did the sons disown their parents for good?

Read more: Canoe Man John Darwin’s fatal error that got him sent down, from cop who caught him

Where are John Darwin’s sons now?

Mark lives in Hertfordshire with wife Flick and their two sons.

Anthony Darwin has attempted to stay out of the spotlight.

Very little is known about the youngest Darwin son.

Did John Darwin’s sons Mark and Anthony ever forgive their dad?

Mark and Anthony believed their dad was dead for five years, after John faked his own death in an insurance scam.

John eventually emerged from hiding, telling police he had suffered from amnesia.

Of course, the stupid and cruel lie was eventually discovered – and Anne’s complicity in the scheme.

Anthony and Mark Darwin played no part in the twisted insurance scam.

They were comforting their ‘grieving’ mother while their dad was actually just metres away in the house next door.

When the truth was exposed, Mark said he was full of “bitterness and fury”.

He and Anthony cut all ties with their parents.

He told the Daily Mail in 2018: “It was a cruel act of betrayal that no parent should ever inflict on their children – the pain and suffering it caused me and my brother is indescribable.

“The horror of the discovery, my sheer fury and what they put me though, is something that will taint my life forever.”

However, Mark HAS been in contact with dad John and has admitted he could “perhaps” forgive him.

Anthony has reportedly refused all contact with his dad ever since.

John now lives in Manila in the Philippines with his second wife, 48-year-old Mercy (no joke).

Journalist David Leigh, who exposed the lie, said on This Morning: “John keeps in touch with one of them [his sons] but the other one has completely disowned him and he doesn’t seem to care you know, and it’s completely the opposite with Anne.”

Read more: The Thief, His Wife and The Canoe: Yes, the cop is Corrie star Andrew Lancel

Are John Darwin’s sons in contact with mum Anne?

Mark and Anthony were forced to face the ordeal of having to give evidence against their own mother in her trial.

She claimed her husband had forced her to carry out the scam.

Nonetheless, the jury found her guilty.

She was released in March 2011 after serving half of her sentence – two months after John left prison.

Mark Darwin and Anthony, 34, have since been reconciled with their mother.

Mark was the first to visit his mum in jail after she was transferred to Askham open prison, near York, in 2010.

Anthony and his wife Louise introduced Anne to her grandson for the first time.

In 2010, Anthony finally followed his brother’s lead and visited his mother.

She has regular contact with her two sons, their wives and her four grandchildren.

Mark has said: “I have forgiven her, to some degree, but I will never understand. Nor forget.

“Nothing can describe the kick in the teeth I felt when I discovered she had been in on the entire thing.”

Journalist David Leigh said on This Morning: “Anne now has both boys back in her life, she has her four grandchildren and she lives a very quiet and anonymous existence.”

Did the sons have any involvement in the making of The Thief, His Wife and the Canoe?

Actor Eddie Marsan revealed that one of John Darwin’s sons sneaked onto the set of The Thief, His Wife and the Canoe for the day.

Eddie Marsan, who plays John in the four-part drama, said: “We had no idea until a few weeks later.

“He had come in with a baseball cap and a Covid mask on to watch. We didnt get any feedback.”

The Thief, His Wife and the Canoe is available to watch on the ITV Hub.

Would you forgive Anne in Mark and Anthony’s shoes? Leave us a comment on our Facebook page @EntertainmentDailyFix.