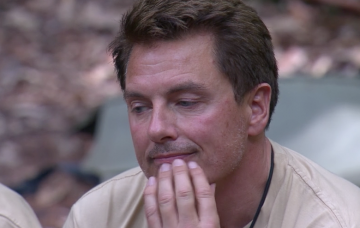 Pair were at loggerheads after TV veteran's entrance

On a sneak preview of tonight’s show, the veteran TV host, who’s been assigned the role of emperor, picks John for the latest trial.

Tensions have been running high between the pair since Noel entered the jungle on last night’s show, having assumed the role of Emperor.

The Torchwood actor clashed with Noel on Thursday’s episode and moaned in the Bush Telegraph that the new campmate was not being sensitive to everyone else’s feelings.

But in tonight’s show, tensions are set to run even higher when Noel, with his campmate Gladiator advisers, chooses John and Emily Atack to tackle the bushtucker trial.

They will go up against Ex-EastEnder Rita Simons and Hollyoaks’ Malique Thompson-Dwyer, who the public voted for.

In the footage released by ITV this afternoon, hosts Dec Donnelly and Holly Willoughby tell Noel that he must choose two other campmates to compete with them.

Dec says: “The winning pair will win a place in your inner circle. They will also be exempt from all duties in camp.”

On Thursday night’s show, Noel took exception to John speaking sarcastically to him and admonished him for “scratching his groin”.

The actor instantly reacted crossly by insisting he was only scratching his waist and later vented steam in the Bush Telegraph.

John said: “I know he was trying to make a joke and be funny but it didn’t land well with me.

“It’s not his fault and I’m an adult, I know that, it was just that moment and some of us are feeling ‘arghhh’.”

Bookies cut odds of John being the first to be eliminated from the jungle as a result of the clash.

Do you think John will quit the jungle? dLeave us a comment on our Facebook page @EntertainmentDailyFix and let us know what you think!