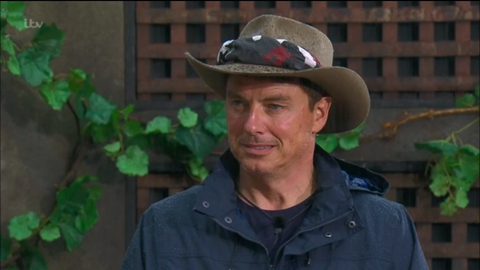 John Barrowman reveals he would “love” to host I’m A Celebrity: Extra Camp

He appeared on the main show last year

John Barrowman has said he would “love” to host I’m a Celebrity: Extra Camp.

The 52-year-old presenter “had a ball” when he took part in the 2018 series of I’m A Celebrity… Get Me Out Of Here! – on which he came third – so he’d jump at the chance to head Down Under again to work on the spin-off show.

Regular hosts Joe Swash and Scarlett Moffatt recently stepped down from their roles.

Asked about the possibility of the job, he told Radio Times: “I’d love to do it – absolutely! I had a ball in the jungle! And I’ve said that I would go back at the drop of a hat if they did an all-star version.

“I really enjoyed my time in there – yes, if ITV wanted me to host the after show, I’d be more than happy to do it!”

The former Doctor Who actor’s campmate Emily Atack has also been linked with one of the spots on the show and John thinks that they, along with returning host Joel Dommett would be the perfect presenting trio.

He said: “With us three, I could be the maturity and they could be the fun. We’d have a nice balance and I think that could work.”

John competed on Dancing On Ice in 2006 and would love to have another try at the skating contest, and insisted he won’t turn down offers of reality TV if he thinks they are “fun”.

He said he’s “always game for these kind of things”.

However, the Torchwood star does have his limits adding that he “wouldn’t do some documentary shows” because he couldn’t wait for “an owl to [bleep] in a barn”.

John’s I’m A Celebrity co-star Emily has also been linked to Extra Camp.

Earlier this week, it was reported that Emily – who was runner-up on last year’s series of I’m A Celebrity – could be taking Scarlett’s spot on the show alongside comedian Joel.

A source told The Sun: “Emily charmed I’m A Celeb viewers with her bubbly personality and self-depracating jokes. She’s a true professional and can more than handle herself live on camera. She has great energy and doesn’t take herself too seriously.

“She’s been open this year about being comfortable in her own skin and producers think she represents real women. She is already mates with Joel.

“Bosses are also planning to book another male presenter to replace Joe as they think a trio of presenters work well on set, with Joel carrying the show.”