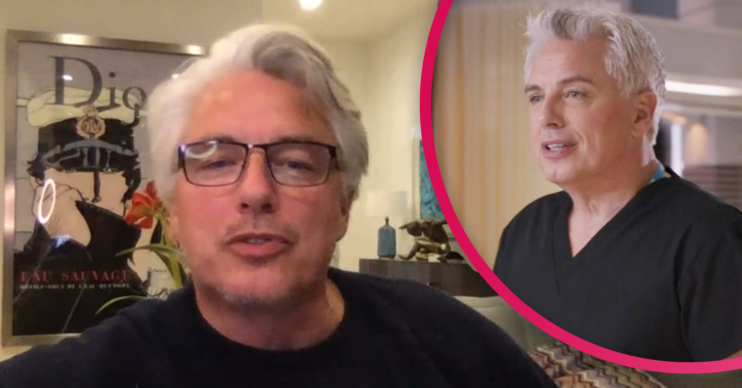 The doctor is a visiting consultant and the role was only supposed to be temporary.

However, during an interview on ITV’s Lorraine this morning, the actor hinted it may be more permanent.

He told host Christine Lampard: “We don’t know whether he’s going to be a good guy or a bad guy.

“But through the grapevine, he might be coming back.”

“We’re not sure if they had a relationship or if she was one of his previous. wives,” he explained. “That hasn’t been delved into yet.

“But they wanted to make sure our chemistry was good together in case if the time comes for him to return, they wanted something we tease the audience with that we can build on later.”

John went on to reveal another Holby City spoiler about what’s in store for Dr Drew.

The star continued: “He’s trying to poach [staff] for a very large hospital in Dubai in the Middle East.

“That’s where he made his money and why he’s doing what he’s doing – he’s broke because he’s had so many divorces over the years!

“But he ends up finding out some really interesting information about someone in the hospital who’s not doing what they’re supposed to be doing – that’s all I can say.”

Holby City has now resumed filming after production was halted due to lockdown restrictions.

Opening up about what it’s like on set, he added: “They have hand sanitiser on set, masks and PPE there. They’re a step ahead of other productions so it should work okay.”

During  the interview, Christine also asked John about Dancing on Ice 2021.

Is the series coming back next year or will it be put on hold?

John said: “Nothing’s been said officially to me but if it does come back I will be there.

“Personally, I would like to know myself because you have to plan ahead now.

“It is something we need because Dancing On Ice is such a great show.”