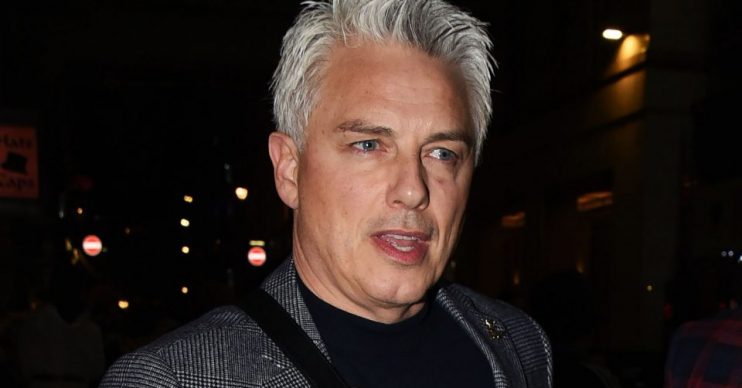 Comedian and presenter Keith Lemon posted a video and photos to Instagram on Thursday (March 5 2020) showing the former Doctor Who actor, 52, dancing in a tiny pair of white underpants on the set of Celebrity Juice.

In the clip, John twerks against a giant red high-heeled shoe while wearing a curly blonde wig while Keith encourages him, crooning a line from the Liberty X song Just A Little.

Just a regular night at a @celebjuiceofficial record! Coming soon to @itv2

Keith captioned it: “Just a regular night at a @celebjuiceofficial record! Coming soon to @itv2.”

But in one of the pictures, John stands smiling for the camera – apparently unaware that his underpants have slipped to one side to reveal his bare ball sack.

“That’s so funny, is that ball bag I can see?” one follower asked in the comments.

Another wrote with a crying-laughing face: “Yeah, I’m sure I can also see a ball bag hanging out there.”

Boys out the barracks, so to speak.

A third said: “Omg what is that in John’s pants.”

“Ummm johns bollock is hanging out mate,” commented a fourth.

Someone else wrote: “A testy is making an appearance in picture three.”

“Boys out the barracks, so to speak,” joked another.

Outside of filming for Celebrity Juice, John is currently gearing up for the final of this year’s Dancing On Ice.

Competing for the number one spot this year are presenter Joe Swash, former Britain’s Got Talent favourite Perri Kiely and Paralympian Libby Clegg.

Ahead of the semi-final on Sunday (March 1 2020), which saw magician Ben Hanlin eliminated, John was pictured on a date night with his husband, his love of 27 years Scott Gill.

The actor and singer, who had been filming in Wales, delighted fans with several snaps of their romantic evening out together, telling his followers: “@scottmale arrived last night and we had the usual cocktail after I finished filming (top secret) tonight we walked past #iantosshrine [a tribute to the Torchwood character] on our way to @everyman_cardiff.”