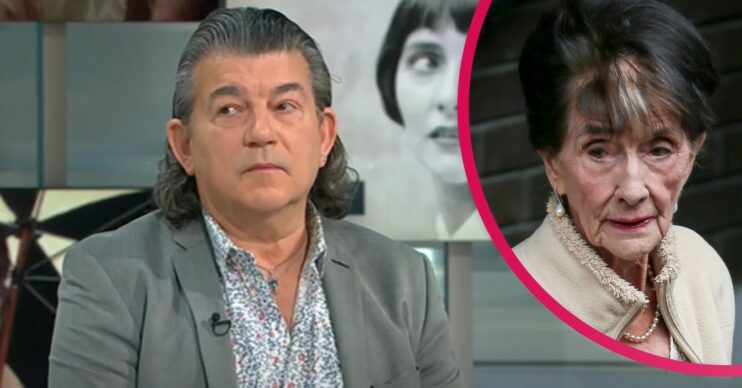 John Altman has said June Brown had “slowed right down” in the month before her death.

Asked when he last saw June, John said: “About a month ago. She was tired. She’d slowed right down.

“I’d like to say, so much thanks and god bless her family who’ve been fantastic, rallying round her – they’ve taken great care of her.

“She didn’t have to go into a home or anything. She spent her last days in her lovely home in the Surrey Hills.”

John went on to pay tribute to June, saying she was his “second mother”.

He said: “She was a dear friend. Someone I could confide in, and probably my second mother, really.

“My real mother said she looked more like my mother than she did!”

Speaking about their time on-screen together, he added: “[They were] treasured moments for me in my career, it was such a joy to work with her.

“She was older than me so she was more experienced – she’d guide me sometimes, say, ‘Slow down a bit on that, dear.'”

John also opened up about their final scenes together, saying their last scene was a “very emotional affair”.

He revealed: “The floor manager said, ‘I swore I’d never shed a tear on the floor’, hardened production people but she said, ‘I did today’, after 35 years together, June and I, on and off.

“We’d walk to the canteen at the BBC and it would always take about half an hour because she’d stop along the way chatting to people. She was so kind.

“She used to say healing prayers, actually. She was quite a spiritual person.”

June died “very peacefully” at her home in Surrey on Sunday (April 3) at the age of 95.

Good Morning Britain weekdays from 6am on ITV and ITV Hub.

Leave your tributes to June on our Facebook page @EntertainmentDailyFix.