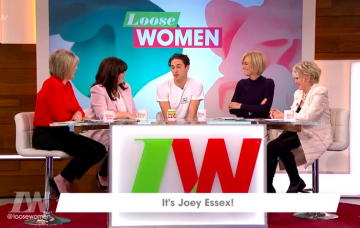 Joey Essex gets told off for naughty hand gesture on Loose Women: “Don’t do THAT!”

The former TOWIE star got in trouble on Monday’s Loose Women, after making a rude gesture live on air.

Joey, 27, was talking about his relationship status, saying: “I am currently single and I’m going to put myself on a ban from relationships for about two years.

Panellist, Jane Moore asked what he meant, and he said: “I feel like I’ve been in relationships for the past four years, pretty much all my life really, and I feel like I need to step back and focus on my career.”

Presenter Ruth Langsford asked if he was planning to stay celibate.

She looked amused, saying: “You’re going to make me explain this to you?”

Cheeky Joey then asked: “Is it…?” and made a gesture with his hands to mean intercourse.

A panicked Ruth told him off, saying: “No, don’t do that, you can’t do that! Don’t do that on daytime television!”

Joey tried to brush it off, saying: “I was just playing with my hands!”

Jane covered her face, while the other panellists, Coleen Nolan and Gloria Hunniford tried not to laugh.

It’s not even the first time in a week the lunchtime show’s been forced to apologise.

The Birds Of A Feather actress was attempting to break a world record with the help of Stacey Solomon – and in the heat of the moment, she let out an expletive.

The swearing came as Linda and Stacey were trying to see how many times they can wear a bra between them in a minute.

With a Guinness World Record adjudicator looking on, one of them had to put the bra on with the help of the other, fasten it, and then take it off and put it on the other person.

Linda became flustered when she was unable to unfasten the bra on her co-star when the clock was ticking down and she ending up screaming “[bleeping] hell!”

Neither she or Stacey were aware of the blunder on live lunchtime telly as they were so caught up in trying to obtain the record.

It was then host Andrea said: “Can we just say, apparently we need to issue an apology as apparently there was some swearing.”

Were you amused or offended by the cheeky gesture? Leave us a comment on our Facebook page @EntertainmentDailyFix and let us know what you think!