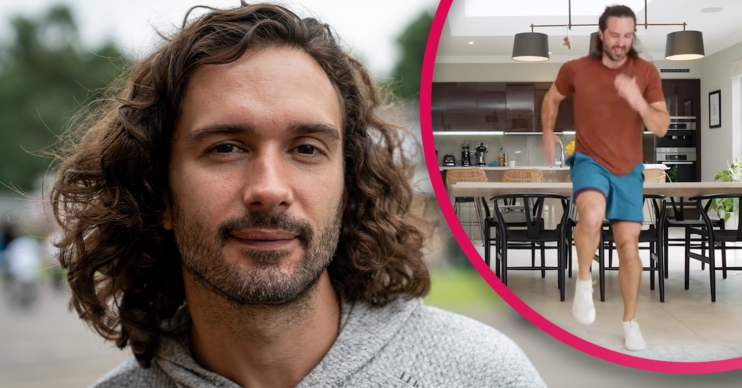 Joe Wicks: How much is The Body Coach worth? Why was his childhood so difficult?

There's more to Joe Wicks than burpees and great hair

It’s an emotional look at his difficult childhood and the impact this had on his mental health.

Joe said he was inspired to make the show after receiving thousands of letters from parents suffering with mental health issues.

Wicks‘ workouts and positivity had helped them get through the lockdown and they wanted to thank him.

Joe told The Guardian: “After [YouTube series] PE with Joe ended, I realised I hadn’t just helped people’s physical health, but their mental health, too.

“I wanted to keep that conversation going.”

In the new documentary, Joe admits that both his parents faced mental health issues while raising him.

Produced by Louis Theroux, the hour-long documentary follows the fitness guru as he talks to his parents for the first time about those years and the effects they had on everyone.

A post shared by BBC Children in Need (@bbccin)

Who is Joe Wicks?

Born in the leafy Surrey suburb of Epsom in 1985, the 36-year-old has two brothers, George and Nikki, and a degree in sports science.

Joe is the son of roofer Gary and social worker mum Raquela.

He originally worked as a teaching assistant but decided to become a personal trainer not long after, and thanks to a loan from his dad, set up his own business.

Wicks handed out flyers outside Richmond train station to drum up business.

But it wasn’t until he started his own YouTube channel that things really started to happen for the Surrey boy.

He’s now The Body Coach, and was awarded an MBE in 2022 for raising millions in cash and spirits.

How did Joe Wicks get famous?

Even before lockdown, Wicks’ YouTube channel The Body Coach had millions of views.

During the pandemic, he’ launched PE With Joe, a free series of workouts designed to keep kids active during the lockdown.

But his easy presenting style, along with his supremely positive attitude, made Wicks just as popular with grown-ups everywhere… And the hair definitely helped.

Read more: Netflix fans are convinced cast of 365 Days are having sex for real

By the end of the lockdown, some 28 million people were watching the workouts.

These days, Joe is a fitness superstar and appears on This Morning, Lorraine and The One Show regularly.

His Lean In 15 series has sold millions of copies, and we love them!

Produced by none other than Louis Theroux, Joe Wicks: Facing My Childhood is an intimate look at the mental health issues his parents faced when he was young.

As a child, Wicks’ didn’t really understand what his parents were going through.

He told the Radio Times: “As a young kid, I didn’t realise my parents had mental health issues. I just thought my dad was a drug addict and my mum loved cleaning.”

What was wrong with Joe Wicks’ mum?

Raquela struggled with bulimia, depression and anxiety, which led to OCD. This caused her to clean the home excessively.

She got help when Joe was 12, leaving her boys while she had therapy for five months.

Talking about leaving her children in the documentary, tearful Raquela reveals: “It was one of the hardest things I ever had to do. I needed to do that to be a better parent.”

Joe himself admits in the film: “We had such a confrontational relationship.

“I couldn’t walk through the door without taking my shoes off or have friends round. If I’d known I would have been nicer to her and loved her more.

“For her to leave a one-year-old with a heroin addict, how hard that must have been… She knew if she didn’t go, her whole world was going to fall apart. She did something really brave.”

Roofer Gary reportedly struggled with depression and a heroin addiction.

He was absent for much of Joe’s childhood, but the pair are close now.

Joe admits in the show: “If you’ve got a father with an addiction or a mother with depression, it’s temporary and you can work through it and come out as a happy family.”

How did Joe cope with his childhood?

In order to cope with the upheaval at home – both his parents did stints in rehab – a young Wicks turned to exercise.

Ultimately, it was the contact from other parents experiencing issues that spurred him to look more deeply at his own family.

PE was the one subject I looked forward to because it helped me focus.

“Millions of parents are experiencing mental health issues, particularly after lockdown. They’re bottling it up and trying to be brave and happy, but inside they’re probably crumbling.

“But I was aware I had this ability to share my story, and that hopefully it would inspire people,” he told the Radio Times.

Joe is married to Rosie Jones. They met in 2016 and got engaged in 2018. The couple married two years later in a private woodland ceremony.

Wicks and Jones, 31, have two children together, daughter Indie and son Marley.

Rosie is expecting their third child later in 2022.

What does Joe Wicks’ wife do?

Jones is currently a model and even appeared on Page 3 in the past – but she can sometimes be seen as a substitute PE teacher.

When Joe couldn’t run the lockdown PE classes after an infection, Rosie stepped in and did an amazing job.

Poor old Joe got more than he bargained for on a bike ride during lockdown.

He fell off the bike and fractured a bone in his hand, but he carried on leading the workouts like the trooper he is, despite his injury.

Unfortunately, his recovery didn’t go as expected. He was later admitted to hospital when the injury became infected.

He described the infection as feeling like “hot magma” in his hand.

After receiving treatment, Wicks was advised to rest, which is why Rosie took over his workouts for a spell.

At the end of the first workout, he asked his wife: “You’re not going to divorce me?”

Despite the gruelling lesson, she replied: “No, because I loved it.”

And viewers, it seemed, very much loved Rosie. Viewing figures hit a whopping 350,000 on her first day.

It must have been the pink leggings!

According to thetab.com, the fitness superstar is worth a whopping £14.5 million.

That alone is said to have made £9 million in the first week.

Not bad for a PE teacher with great hair.

Indeed he is and you can find him @thebodycoach.

While they share the same surname and a pretty similar hairstyle, it’s not thought that Joe and Pete are related.

Joe Wicks: Facing My Childhood airs on BBC One at 9pm on Monday May 16.

So are you going to watch tonight? Leave us a comment on our Facebook page @EntertainmentDailyFix and let us know what you think.