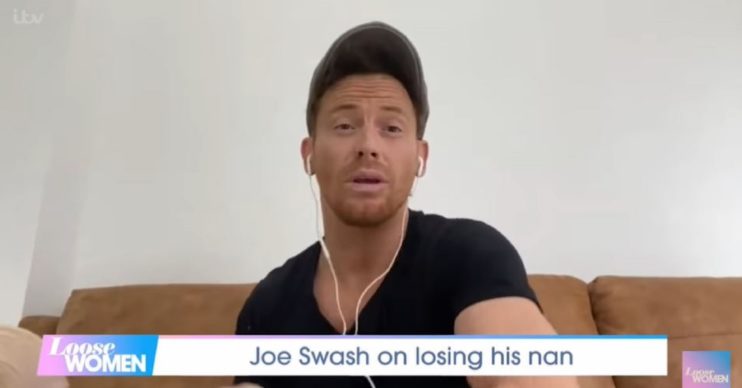 All because of the lockdown

Presenter Joe Swash has revealed his regret at not being able to fulfil his nan’s final wishes before she died.

The former I’m A Celebrity: Extra Camp host, 38, told fans last month that his beloved grandmother had passed away.

What did Joe Swash say on Loose Women?

And speaking on Loose Women today (Friday, June 5), he explained how the coronavirus pandemic and lockdown meant he and his family were not able to give his nan the funeral she wanted.

Speaking via video link, he told the Loose Women panel, which featured his partner Stacey Solomon: “That’s the difficulty with losing someone at the moment.

“We didn’t get to say goodbye. And you know, the thought of my nan being on her own as well was really difficult.

“The funeral, not everyone could come to the funeral. She was so important to us. She had 24 grandkids and 12 great-grandkids. So she’s going to be missed so much, we’re devastated.

“It just sucks that it happened during corona, because it means we couldn’t fulfil my nan’s last wishes. She planned her funeral, she knew how she wanted it.

“It’s been really difficult but I’m not the only one. Other people are going through it as well.”

Wished they had ‘spent more time’ together

Joe revealed his nan had died in May with an emotional post on Instagram, telling fans he wished he could have “spent more time” with her before she died.

He shared a snap of the two of them smiling for a photo alongside his youngest son, baby Rex.

Joe wrote in the caption: “Goodnight, Nanny Fran. Sleep well. I miss you so much already. I’m heartbroken.

His emotional tribute continued: “But I know you know how much we all love you and you’ll be watching down on us, looking after us forever more.”