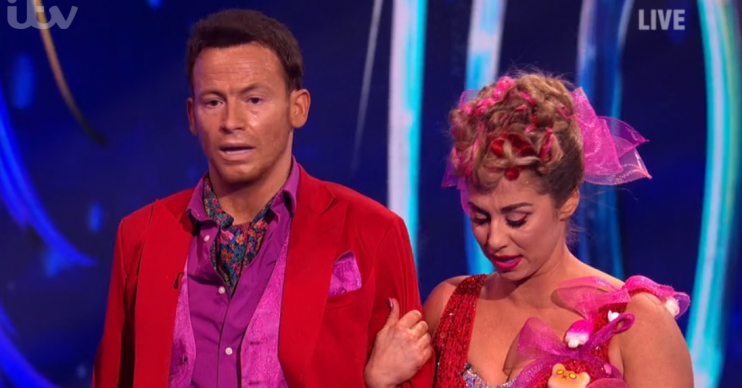 The accident was 'worst fall of professional partner's career'

Joe Swash ‘nearly broke his partner’s back’ in a horrific skating accident on Dancing On Ice as he battled with grief after learning close friend Caroline Flack had taken her own life.

Read more: Caroline Flack death: Joe Swash shares tearful tribute to ‘the most amazing person you could come across’

An error by Joe, 38, saw him drop professional skater Alex Murphy and land on her back during the shocking fall, which she branded ‘the worst accident of her career’.

“When we had found out about Caroline we had to go to work the next day,” Joe told The Sun.

“It was a really messed up day and my mind wasn’t on it. I dropped Alex really badly on her face and I nearly broke her back. That day was a total blur.”

Alex added: “It was really bad. It was the worst fall of my career, I’ll never forget it. We were very emotional, we cried a lot that day.”

It was really bad. It was the worst fall of my career, I’ll never forget it.

Joe wasn’t sure if he should step down from the live shows but bravely performed just a day after Caroline’s death.

Read more: Joe Swash reveals he has an ear infection ahead of Dancing On Ice final

Joe and Alex will compete in this Sunday’s Dancing On Ice final against Perri Kiely and Libby Clegg.

Fans worried Joe may not be able to skate when he was pictured on Instagram with a huge bandage wrapped around his head.

It turned out Joe just has an ear infection and show bosses are being extra careful and taking precautions with the bandage.

Girlfriend Stacey Solomon took to social media to reassure fans that Joe will be competing in the final.

We’re looking forward to seeing what routines Joe and Alex have in store on Sunday!