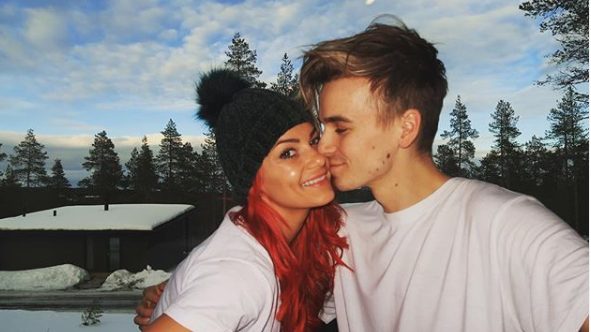 Dancer Dianne Buswell is one lucky lady on her 30th birthday. The Strictly Come Dancing pro has been treated to a giant mermaid-themed cake by boyfriend Joe Sugg.

The loved-up couple, who met on the last series of Strictly, both shared images of the delicious-looking bake on their Instagram accounts.

The two-tiered delight is covered in multi-coloured icing and melted chocolate and is topped with a mermaid tail in homage to Dianne’s love of The Little Mermaid.

Joe revealed the bespoke cake was made by London bakery Flavour Town as he shared a picture of Dianne beside it.

“The only person more beautiful than a @flavourtownbakerycake,” he captioned the image.

The birthday girl also showed off the cake on her Stories while playing the song Under The Sea from the Disney film that inspired it.

There was certainly no expense spared on it by Joe, as Flavour Town’s customised two-tiered cakes cost £255 according to their website.

Dianne appears to be feeling nostalgic as she celebrates her milestone birthday as she posted a number of images from her childhood on her Instagram Stories.

Beside one of her as a baby with her father posted on her main account, she wrote: “When your dad posts this and makes you tear up.

“Last day in my 20s. Here’s a lovely throw back to me and my dad in the outback of Australia I was a daddy’s girl back then and still am today as an almost 30 year old.”

The professional dancer was inundated with happy birthday messages including many from her Strictly co-stars such as Katya Jones, Amy Dowden and Chloe Hewitt.

Meanwhile, Joe’s sister Zoe also paid tribute to her ‘in-law’ sharing an image of them on a children’s ride with the caption: “Happy Birthday to this gorgeous gal”.

Dianne has been touring the country with Amy and Chloe with their show Here Come The Girls, which features a mix of ballroom and Latin performances from the trio.

She’s currently appearing on the Strictly Pro tour, but there’s no performance on her birthday so she can hopefully enjoy some further celebrations with Joe.

When the show finishes touring in June, she’ll then have a brief break before preparing for the next series of Strictly, as it’s already been confirmed she’s one of the professionals returning this year.

What do you think of Dianne’s elaborate birthday cake? Leave us a comment on our Facebook page @EntertainmentDailyFix and let us know what you think!