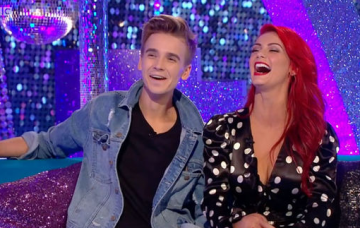 What ARE they putting in the tea at that studio?

The rumours of romantic entanglements are as much a part of the Strictly season as the cha cha chas and the foxtrots, and it’s a lucky celeb or pro dancer who manages to avoid gossip about what they do in their downtime.

The latest couple to come under Cupid’s glare is vlogger Joe Sugg, 27, and his pro dance partner Dianne Buswell, who, according to the Sun are enjoying a ‘budding romance’ after Dianne split from her boyfriend.

An insider told the paper that Australian Dianne, 29, had spent the night at Joe’s home, and that the pair were spending time together outside of the show, and going out for dinner and drinks.

Citing a ‘BBC source’, the paper claimed that ‘Joe and Dianne are keeping things low-key but they’re having a lot of fun’.

They went on to report that it appeared to be an open secret on the Strictly set with everyone having noticed ‘how close they’ve become’.

“They are not calling each other boyfriend and girlfriend just yet, but they’re definitely more than just friends,” the mole revealed. “They are very fond of each other.”

The source also said that the couple were trying to keep focused on their routines, and remain in the competition for as long as they can.

“They are hoping to stay in the contest for as long as possible and are trying to focus on dancing for now, but they’re seeing where things go,” they said.

Australian dance pro Dianne had previously been in a 10-month relationship with Emmerdale actor Anthony Quinlan, 34.

But far from being bitter, Anthony magnanimously told reporters earlier in the week that he was rooting for Joe and Dianne, and put his break up with her down to distance.

“We’re still really good friends – it’s just distance played a part. There were all these rumours about the ‘Strictly’ curse but it wasn’t that,” he told the Daily Star.

“I’m actually rooting for Joe and Dianne. They’re doing absolutely amazing in Strictly and I still think the world of the girl. We were really close, it just wasn’t meant to be.”

Dianne and Joe’s alleged closeness comes just weeks after their Strictly colleagues Seann Walsh and Katya Jones were papped snogging in an alleyway, and just a day after we revealed that Ashley Roberts and her pro partner Giovanni Pernice are reportedly in the early stages of a romance.

We have reached out to Strictly’s press office for comment on the rumours.

Do the off-the-dance-floor antics of the competitors keep you as enthralled as the dance routines? Or would you rather just hear about the contest?  Leave us a comment on our Facebook page @EntertainmentDailyFix and let us know what you think.