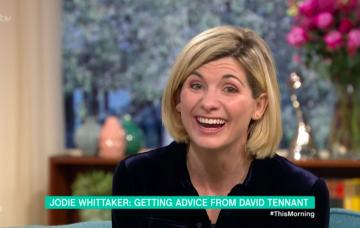 We're so excited for this new series

Even if Doctor Who isn’t your usual cup of tea, it’s been hard to miss the excitement around the new series, starting this weekend.

Not only do we have our very first female Doctor, in the form of actress Jodie Whittaker, but we also have the completely hilarious TV presenter Bradley Walsh playing her assistant, Graham O’Brien.

And speaking in a new interview, Jodie has opened up about what it’s like having the cheeky star on set, joking: “Bradley Walsh is a nightmare to work with!”

The 36-year-old actress made the comment during an appearance on Tuesday’s This Morning, explaining to presenters Holly Willoughby and Phillip Schofield that she wasn’t allowed to say much about the new series, but could “officially” confirm that much about her 58-year-old co-star.

The Chase star will be joined by two other assistants, played by actors Tosin Cole and Mandip Gill.

Speaking more seriously, Jodie said of her new co-stars: “We were really lucky, this is an intense nine months of filming and this was four people who didn’t know each other previously.

“I couldn’t have fallen more in love with a group of friends, it’s been incredible.”

She later laughed about how Bradley’s “method” of acting is “being a 14-year-old boy, all day, every day.

“Sometimes he likes to try to make you laugh. If he’s not on camera, he can be behaving appallingly. There are a lot of childish noises. Bathroom fart noises going on…”

The BBC have been dropping hints all over the place about what we should expect from the new series, starting this weekend.

The first episode is called The Woman Who Fell To Earth and will introduce us to Bradley’s character.

On Tuesday, they posted several new behind-the-scenes pictures to the official Doctor Who Instagram, adding the caption: “Graham O’Brien is about to have his world turned upside down. 7th October. #DoctorWho”.

Bradley spoke to The Metro on Monday about his new role.

He said a little enigmatically: “Everything, on a daily basis, is brand new for my character, and out of interest for my particular character. It’s a situation. But when you find out during the show – when it comes out what he did and what he does for a living – then you’ll get it.

“Under no circumstances in a normal job would you understand it, it would be mind-blowing…”

We can’t wait to see how Bradley gets on as an alien’s sidekick. We have a feeling he’s going to be utterly brilliant…

Will you be watching the new series of Doctor Who? Leave us a comment on our Facebook page @EntertainmentDailyFix and let us know what you think.