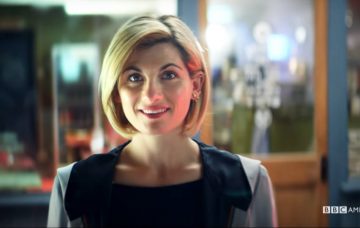 All about Jodie Whittaker, the new Doctor Who and first actress to take on the role

Never before in the history of Doctor Who has there been a female Time Lord in charge of the TARDIS.

But now, after 55 years and twelve other Doctors, Jodie Whittaker will be picking up Peter Capaldi’s sonic screwdriver for more adventures in space and time.

Jodie, 36, was unveiled as the latest incarnation of the BBC sci-fi favourite last summer.

And although her casting was met with grumbles in some dank corners of the internet, the majority of fans are overjoyed such a talented actress has taken on the role… even if there were a lot of jokes made about ‘women drivers’ as her Doctor struggled to control a free falling spaceship during her regeneration scene.

Indeed, Jodie has already made her grand entrance as The Doctor, even if she hasn’t made her debut proper as the show’s lead.

That – and the new, eleventh series of Doctor Who – is scheduled to air on BBC One in the autumn.

But until then, here’s a little bit more information about the star behind the next portrayal of the two-hearted hero with a PhD in cheesemaking…

Where else have you seen Jodie Whittaker?

Jodie made her professional stage debut at the Shakespeare’s Globe theatre in 2005 and bagged her first major role in the 2006 film Venus.

Co-starring with cinematic legend Peter O’Toole isn’t the worst way to make a movie bow, is it? Her role as spiky nude art model Jessie also bagged her a host of ‘best newcomer’ award nominations.

A supporting role as Beverly the receptionist in two St Trinian’s films also helped beef out her CV.

Even though Jodie managed to avoid spending significant amounts of screen time in a schoolgirl’s costume, she was still lumbered with those earrings.

In 2009 she played another memorable TV role, as shy Peggy Bell in Return to Cranford. After losing her father, family friends worried for Peggy who dressed in outdated clothes and lacked suitors.

Nonetheless, Peggy eventually falls for the Eton-educated son of a wealthy widower played by Tom Hiddlestone.

And although Peggy and William Buxton (Hiddlestone) overcame his father’s objections, a happy ending was beyond them. Her dodgy brother, Edward, meets a grisly end thanks to a train explosion.

From breakthrough star to lead star

Playing a young nurse who teams up with young street gang that originally mugs her, this comedy horror sci-fi also launched John Boyega to stardom.

In December 2011, just months later, Jodie appeared in The Entire History of You, part of the Black Mirror series.

This gripping techno-tale of betrayal was set in an alternative reality where people’s memories can be played back. Unfortunately for her character, those memories proved her infidelity.

And then there was Broadchurch…

But despite all of these high-profile and critically-acclaimed performances, Jodie’s career really took off in 2013.

Playing the role of Beth Latimer in Broadchurch across all three series of the primetime hit raised Jodie’s profile immensely.

Her performance as the grieving mum was as critically-acclaimed as it was widely-seen.

And her working relationship with Broadchurch writer Chris Chibnall would also ensure she was top pick to get behind the wheel of the TARDIS when he became the new Doctor Who showrunner.

The possibility of a female Doctor had been mooted a couple of time previous to Jodie’s 2017 casting.

Press and fan speculation was feverish over the possibility in 2013 before Peter Capaldi was appointed.

But with My Family and Death in Paradise Kris Marshall heavily tipped as a shoo-in after Capaldi’s departure was announced, the chances of shaking up the Doctor’s gender seemed slim.

Jodie’s momentous new job was revealed on TV in a special teaser clip after the men’s Wimbledon final.

Chibnall was obviously excited to have Jodie on board for the landmark casting.

“I always knew I wanted [it] to be a woman and we’re thrilled to have secured our number one choice.”

“Her audition for The Doctor simply blew us all away.”

Despite the outrage from some quarters over a woman playing a shapeshifting alien, Jodie coolly played down criticism.

Jodie also admitted she’d had to tell a lot of fibs when asked about Who after winning the role.

She also revealed she had used ‘Clooney’ as code for the role during negotiations. How ironic given Jodie urged fans “not to be scared by her gender”!

However, Yorkshire-born Jodie – whose Doctor’s first words “Oh brilliant!” had the same accent – remains modest and hopeful her Doctor will inspire.

She also spoke about the privilege of diversifying a character that has always been “attainable” rather than a “chiselled superhero”.

“And now it isn’t just attainable for half of the population,” she said.

“The other half can be the Doctor as well. Girls will no longer just think, ‘Oh, I could be a companion’.

“Being the first female Doctor and showing children that their heroes in shows don’t always look the same is a huge honour for me.”

Are you excited to see Doctor Who played by a woman for the first time? Leave us a comment on our Facebook page @EntertainmentDailyFix and let us know!

BBC One Doctor Who