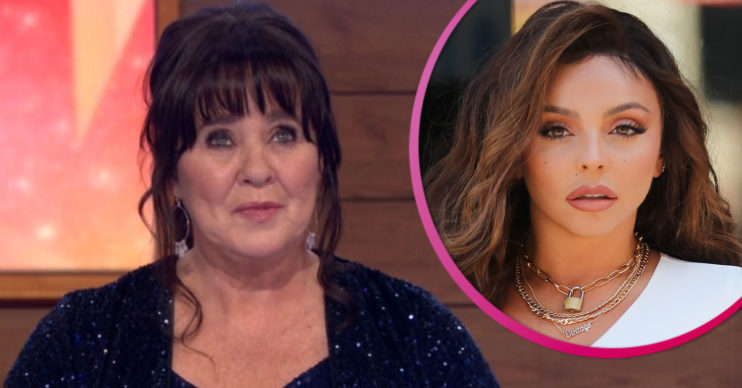 Pop star Jesy announced on Monday that she’s leaving the band as it’s taken a toll on her mental health.

Speaking on Loose Women on Tuesday, Coleen said Jesy – who was previously engaged to Coleen’s son Jake Roche – has made the “right decision”.

What did Coleen say about Jesy Nelson?

Coleen said: “I’ve got feelings for Jesy because I’ve known her very well. I totally get it.

Read more: Jesy Nelson is leaving Little Mix: Being in the band has taken a toll on her ‘mental health’

“I was in a girl band but in a family girl band, so you always felt protected.”

Speaking about backlash she received when she was in a band, Coleen continued: “The pressure then, I joined at 15, was hard but it was just like a critic in a newspaper.

“Equally, when someone that young goes from not being known at all to being on the biggest talent show in the country and instantly being thrust into that spotlight and getting trolled, the pressure of that must be immense.”

She added: “From knowing Jesy in the past, I’ve not seen her for a few years now, but when I knew her she was struggling then with it all.

“I think it’s the right decision for her mental health and I wish her all the best. I think it’s a hard but great decision.”

It comes after Jesy released a statement confirming her decision.

Jesy said: “The past nine years in Little Mix have been the most incredible time in my life.

I’ve got feelings for Jesy because I’ve known for very well. I totally get it.

Jesy said she’s “ready to embark on a new chapter in my life” however, she’s not sure “what it’s going to look like right now”.

It read: “After an amazing nine years together Jesy has made the decision to leave Little Mix. This is an incredibly sad time for all of us but we are fully supportive of Jesy.

“We love her very much and agree that it is so important that she does what is right for her mental health and well-being.”