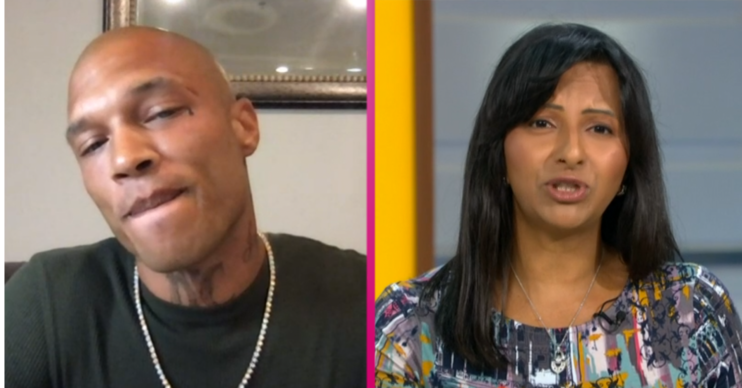 The 36-year-old, nicknamed the “hot felon”, appeared on the show to talk about the Black Lives Matter movement.

But as he spoke to hosts Ben Shephard and Ranvir Singh, viewers took to Twitter to complain.

One wrote: “Jeremy Meeks on @GMB… he didn’t answer any questions they asked. He made no sense whatsoever.”

Another added: “Did nobody check in with him and vet him as he is not making a whole load of sense sadly?”

READ MORE: Where is Piers Morgan? Why is he not on GMB today?

Moments later, a third tweeted: “Jeremy Meeks was a complete waste of time, the man couldn’t string a sentence together.”

Jeremy appeared on the show to discuss the Black Lives Matter movement as well as his experiences growing up in the US.

He was born addicted to heroin to drug addict parents.

When asked about his childhood, he said: “Life was rough but also I really just need to touch on, you know, growing up, I also was half white and half black so I know I’m switching to a whole other subject.

“Those difficulties in itself on top of everything else, you see what I’m saying, it’s you know, it was a hard childhood.

“I wouldn’t wish that on anyone I would just say that.

“But my mum is doing good, let me just say that.”

Jeremy is a convicted criminal and was part of criminal gangs.

However, his life changed when a police mugshot was released to the public and went viral.

After, he was nicknamed ‘the hot felon’ around the world.

“That picture came out and within 24 hours – I never had social media of any sort so I didn’t know what viral meant.

“When news [outlets] came to see me I found out. Things changed very fast and for the better.”

Jeremy Meeks turns his life around

The US star went on to reveal how the viral picture changed his life.

He continued: “It was such a blessing, It gave me the means to support my family legally and to educate myself on business and educate my children.

“I now own my own clothing line. I’m very proud to say that I am a black designer and business owner.”

However, he insisted he still has a good relationship with her billionaire father Sir Philip Green.

It’s reported he is now in talks for his life to be turned into a Hollywood movie.

What do you think should happen to the Robert Baden-Powell statue? Visit our Facebook page @EntertainmentDailyFix and let us know what you think of this story.