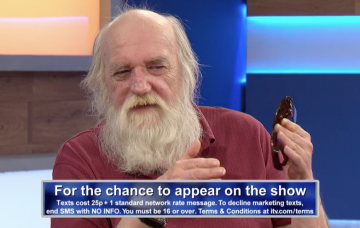 Jeremy Kyle viewers were left shocked after a Father Christmas lookalike was forced to deny sleeping with Thai prostitutes and begged his son for a kidney.

Barry, nicknamed “Poundland Santa” by cheeky fans, was on the ITV daytime show with his son Colin, who is refusing to give him the vital organ.

The big-bearded spitting image claimed his ex-wife, Colin’s mum, had been brainwashing him and that they had phoned him to wish he was dead.

He was also forced to deny his son’s allegation that he spends all his money on Asian sex workers.

But viewers were more interested in who Barry looked like, and also branded Colin a living, breathing Where’s Wally? double.

One tweeted: “Can’t believe Jeremy got Father Christmas on his show this year! Poor Santa just wants a kidney for Christmas.”

Another wrote: “Santa’s put himself on the naughty list.”

Another added: “Even Santa has family problems!” A fifth said: “Poundland Santa!”

And one viewer tweeted: “Father Christmas is looking a little worse for wear.”

Even Santa has family problems! #jeremykyle

Father Christmas is looking a little worse for wear #jeremykyle

Did you Leave us a comment on our Facebook page @EntertainmentDailyFix and let us know what you think!