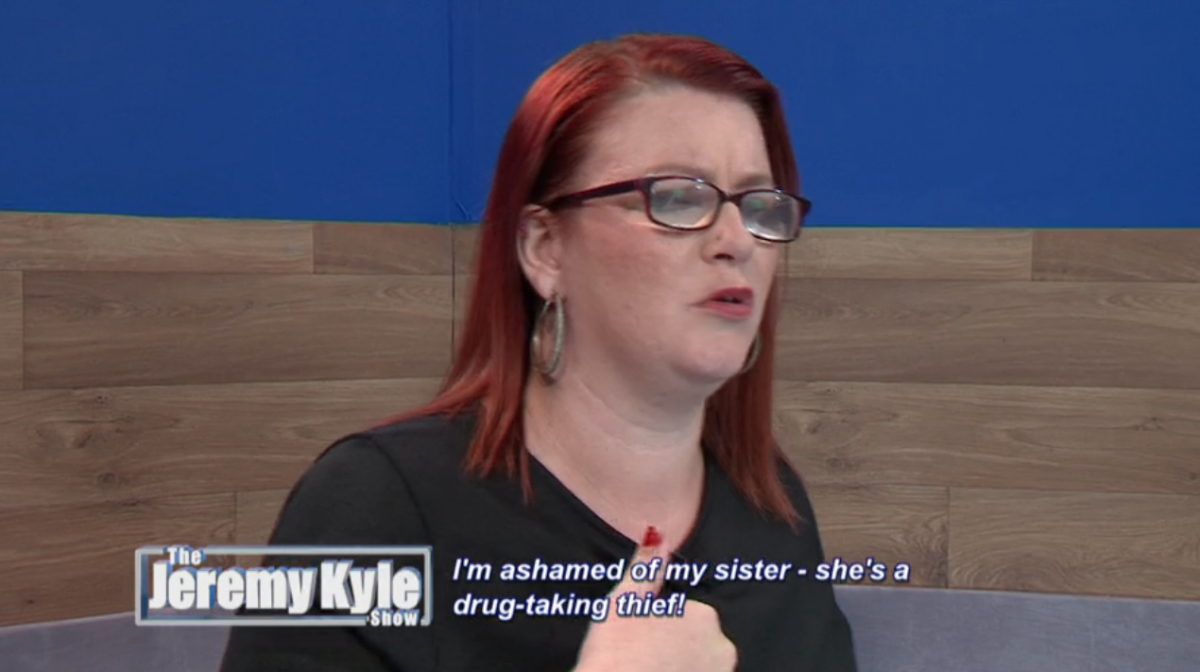 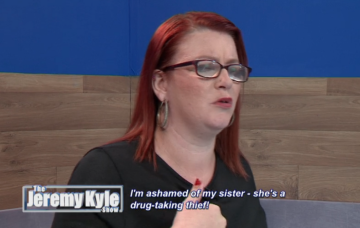 Narky guest's gums were flapping, and that's the tooth

Chat show presenter Jeremy Kyle struggled to control his studio earlier today as a warring family kicked off at one another before they had even been brought out on stage.

One of the most belligerent guests ever to feature on the ITV show returned for a third riotous appearance as part of the programme titled: ‘I’m ashamed of my sister – she’s a drug-taking thief!’

And while she caused havoc and frayed Jezza’s nerves with her constant shouting, swearing and stomping around as she saw fit, it was another aspect of her general demeanour that caught the eyes of most observers.

At first glance, it appeared the guest – Lisa – possessed only one tooth in her mouth.

And while that was soon proven to be wrong as she hollered ever louder, giving viewers other angles from which to gawp at her distressing gobhole, it seems unlikely Lisa will be receiving any commendations on her dental work any time soon.

As it turned out, Lisa appeared to have a full row of toothy pegs in the lower part of her mouth – but the sole fang up top certainly seemed to be surviving in her upper gums on its lonesome.

The reason for Lisa’s confrontation with her sister Chantelle, who she had only recently met after the 18 year old had spent 14 years in care, and their mum Claire certainly took a back seat to the real drama happening in Lisa’s mouth.

Her mouth even had a telly presence when it wasn’t visible, with Lisa screaming profanities and objections from the seating area offstage.

And as Jeremy began to show his despondency and frustration mere moments into the show, it was clear the entire segment would be a fiasco.

Before long both Lisa and Claire – stomping around with the help of a walking stick – had both come onto the stage before their time, wailing and swearing and jabbing their fingers at one another.

“No! Go away!” Jeremy raged to little effect as he tried to usher both Lisa and Claire away from the cameras.

But all of this action was just a backdrop to Lisa’s scene-stealing tooth, going by the social media reactions from viewers.

“How come everyone that goes on Jeremy Kyle’s show ain’t got any teeth?” asked on fan on Twitter.

“Colgate should sponsor the Jeremy Kyle show! Lovely set of teeth again today,” suggested another, although it may be way too late for toothpaste in this case.

“Is this a repeat or just repeat offenders? Those teeth (or lack of) are unforgettable,” pondered a third observer.

And a fourth joked: “When you’ve been on #jeremykyle more times than you have teeth.”

Although Lisa’s lifestyle and personal hygiene choices were not probed specifically, it was later revealed she had failed a drug test for MDMA and cannabis.

Denying the results, she replied: “The only thing I’ve taken is cocaine.”