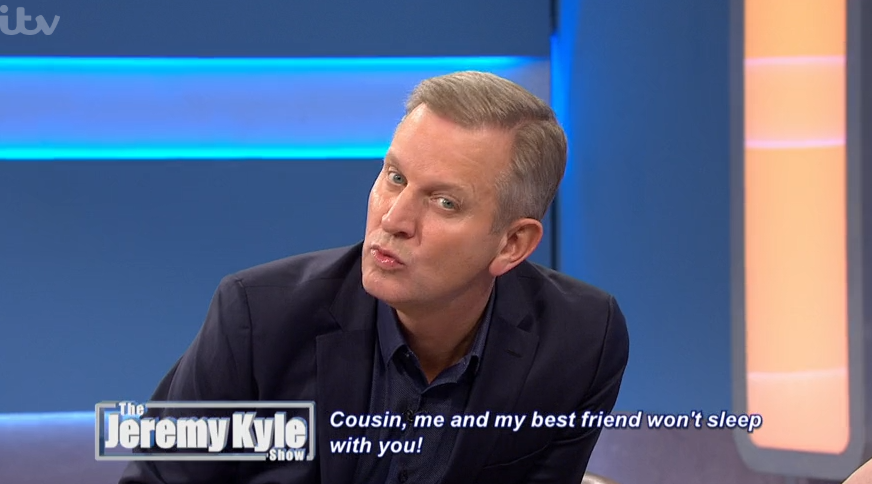 Host Jezza couldn't believe it either!

Anthony was on the show alongside his friend Oliver, as they both wanted to tell Antony’s cousin Kelly to leave them alone.

The pair both had a sexual relationship with Kelly, despite her being Anthony’s cousin.

Anthony called his sexual encounters with Kelly “drunken mistakes” and said it wasn’t even “good sex”.

However, Kelly shouted from backstage: “But you kept coming back for more!”

Kelly was joined by her friend, who Anthony claimed he slept with too.

Anthony and Kelly were abandoned by their family because of their romance.

While many viewers were, of course, grabbing the popcorn and watching the drama unfold, others were distracted by Anthony’s braided hair.

Anthony sported a short ‘do, which came down to his ears and styled in a series of small braids.

And underneath each plait, Anthony’s hair was slightly shaven.

One person wrote on Twitter: “I’m just going to pretend not to have noticed his hair.”

Another said: “I beg, if there’s any hairdressers in the audience, sort mans hair out.”

“What the chuff is going on with this blokes hair,” a third tweeted.

Im just going to pretend not to have noticed his hair. #jeremykyle

What the chuff is going on with this blokes hair #JeremyKyle pic.twitter.com/zGryrENEym

One person joked Anthony looked like he’s “been out all night in Storm Gareth” – the storm that is battering the UK at the moment due to its severe gales and heavy rain.

His hair looks like he’s been out all night in storm Gareth #jeremykyle pic.twitter.com/dqZRguaroH

And it wasn’t just viewers who were stunned by Anthony’s hairstyle.

Staring at Anthony’s locks, Jeremy said: “Goodness me! Wow,” as he giggled.

What did you think of Anthony’s hair? Leave us a comment on our Facebook page @EntertainmentDailyFix and let us know.