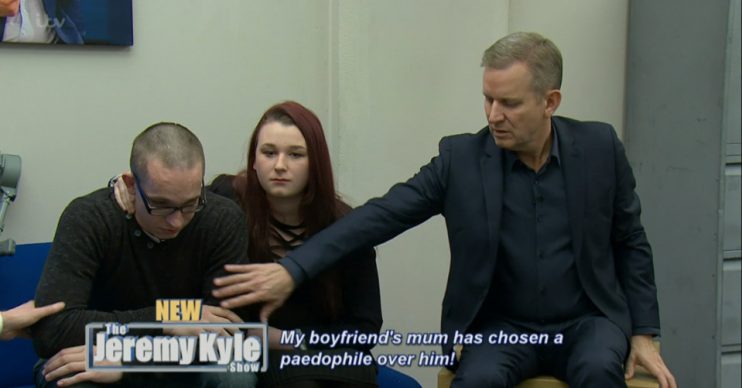 They branded the mother "sickening"

It takes a lot to shock viewers of The Jeremy Kyle Show, but one mother managed it today.

On Wednesday (May 8), Steph appeared on the show accused of choosing a convicted paedophile over her own son and grandchildren.

And fans of the ITV series were disgusted with her, calling her “sickening”, “horrible” and much, much worse.

In fact, it was Nathan’s girlfriend who contacted the show in total shock that his mum could choose to live with a sex offender.

During the episode, entitled ‘My boyfriend’s mum has chosen a paedophile over him!’, Georgia explained the sordid details of the family breakdown.

And even host Jeremy couldn’t hide his horror as Steph admitted she chose to live with a registered sex offender, despite the fact it could mean not seeing son Nathan again.

Steph’s boyfriend, whose name and identity could not be revealed in order to protect his victim, was sent to prison for seven years for the attempted rape of a child. He served four and a half years.

He was later sent back to jail for breaching the terms of his licence and given a suspended sentence for having extreme pornography on his phone.

Failing to sign the Sex Offender Register meant another spell inside – this time for 11 months.

Understandably, Nathan wanted absolutely nothing to do with the man – and failed to comprehend why his mother stays with him.

Appearing on the show to attempt peace between the family, Nathan’s girlfriend Georgia begged Steph to choose her son instead of her paedophile boyfriend.

However, Jeremy and viewers were horrified as Steph tried to justify her relationship with the paedophile and insisted her boyfriend and her son “used to get on”.

She even admitted they used to “play fight” together.

Jeremy shouted: “You let a convicted paedophile play fight with your son?! He is convicted of abusing a child! What sort of person harbours with that sick person?”

He went on: “What are you thinking? How do you pick a convicted paedophile over your own son? This is a man who’s on the Sex Offender list for life.

“What would you do if you came downstairs and he was with your granddaughter?”

An upset Nathan, who refused to appear on stage, revealed that he only found out that his mum’s boyfriend was a paedophile from social services after they left the house.

Jeremy later spoke to the convicted man via video link – with the man’s identity protected – and let rip, saying: “Why don’t you do the decent thing, you vile human being, and leave the woman and run away and disappear down some hole?”

The man replied: “I gave her the choice.”

Tragically, Steph stuck by the convicted peadophile and she and her son Nathan parted ways.

How can a woman pick a paedo over her kids. Sickening.. #jeremykyle

I cannot bear this woman. How can you defend a paedo? How can this woman expose her kids to such a monster? It makes me feel ill! #jeremykyle

Viewers at home shared their repulsion on Twitter with one typing: “How can a woman pick a paedo over her kids? Sickening. #JeremyKyle.”

Another said: “How a mother or any women be with a paedo is beyond me… It’s the one thing in life I can’t deal with #JeremyKyle.”

A third fumed: “I cannot bear this woman. How can you defend a paedo? How can this woman expose her kids to such a monster? It makes me feel ill! #JeremyKyle.”

A rep for The Jeremy Kyle Show told us: “Steph is still with her partner and unfortunately is still estranged from her son Nathan.”