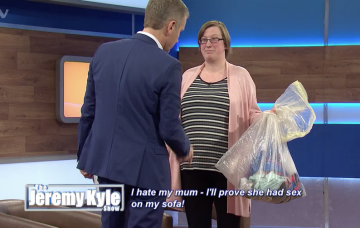 She wanted to prove her mother had sex on her sofa

They say never air your dirty linen in public — but that is literally what one angry woman did on today’s Jeremy Kyle Show.

Returning guest Anna stunned viewers by bringing her mum’s used underwear with her in a bin liner.

She took the bizarre step in a bid to prove mother Gloria had sex on the sofa in her house.

The studio audience gasped in shock as the daughter brought out the clear bag of “evidence”, which also contained “men’s thongs” allegedly belonging to Gloria’s boyfriend Andrew, who the host dubbed “Randy Andy”.

Anna said her mum had been making her life hell and had bombarded her with requests to return the knickers.

Jeremy said: “Today she wants to prove once and for all that Gloria did have sex on her sofa — I apologise for the next sentence — and even left suspicious stains when she came to visit. I hope she has reversible covers.”

Anna said: “We heard noises when she stayed. There was a child upstairs. It’s disgusting. She should be a mother but she’s not.”

The host also read out a statement from her, describing Gloria as a “sex addict”.

“You say ‘She’s nothing but a sex-obsessed monster’. You told my team, ‘She had always chosen men and sex over me. No mother, no grandmother’.”

But her mother and Andy called her a liar and agreed to a lie detector test, which proved that they hadn’t had sex on Anna’s sofa after all.

Fans were disgusted and flabbergasted that she had brought her mum’s dirty smalls onto national television.

Can’t believe she took the smelly pants with her. #jeremykyle

#jeremykyle They are literally airing their dirty laundry

After passing the test, Gloria picked up the bag of her underwear and walked off.

What do you think of Anna’s actions? Leave us a comment on our Facebook page @EntertainmentDailyFix and let us know what you think!