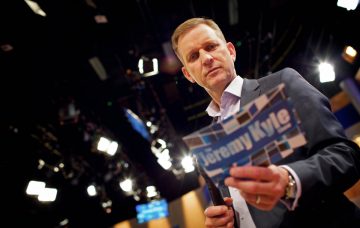 ITV confirmed the show has been permanently scrapped

Viewers of The Jeremy Kyle Show have expressed their sadness and anger that the long-running series has been axed for good.

ITV confirmed the tabloid-style talkshow has ended production after a guest, Steve Dymond, was found dead just days after his appearance.

It’s understood that Mr Dymond had approached the show in an attempt to prove he hadn’t been unfaithful to his partner, Jane Callaghan, but he failed the lie detector test – which prompted the end of his relationship.

Mr Dymond is believed to have taken his own life last Thursday as a result of his appearance on the show and the subsequent breakdown of his relationship.

Now, ITV has permanently scrapped the programme after criticism from Mr Dymond’s family and viewers.

The series, which has been running for 14 years and invites guests to air their dirty laundry in public, was pulled from the schedules on Monday after news of the death became public knowledge.

On Wednesday (May 15), Carolyn McCall, ITV’s CEO, announced: “Given the gravity of recent events we have decided to end production of The Jeremy Kyle Show.

But, while fans of the show obviously had sympathy for the circumstances surrounding the death, they questioned the channel’s decision to axe it.

How can @ITV cancel The Jeremy Kyle Show? I feel sorry for the person that lost their life and his family but at the end of the day people go on these shows knowing what they are facing .. you shouldn't go on the show if you arent prepared to be called out on your own lie. Shame

@ITVJeremyKyle I’m so so sad to hear the show has been axed! Fight to get it on another channel please!!!!

İ watch JK and looked forward daily, so sad it's the end

One said: “How can @ITV cancel The Jeremy Kyle Show? I feel sorry for the person who lost their life and his family but, at the end of the day, people go on these shows knowing what they are facing… You shouldn’t go on the show if you aren’t prepared to be called out on your own lie. Shame.”

A third said: “I’m literally so sad that The Jeremy Kyle show has been axed.”

“I’m so so sad to hear the show has been axed!” expressed another. “Fight to get it on another channel please!!!!”

Others questioned why Love Island is returning, despite the death of two of their contestants.

Many applauded ITV’s decision to axe the show, however, calling it “toxic”, “exploitative”, “cruel”, “humiliating” and preying on the “vulnerable”.

Me after hearing ‘The Jeremy Kyle Show’ has been permanently cancelled.#JeremyKyle pic.twitter.com/ACdWV8mT0k

Odd that it’s taken 14 years for there to be a public outcry over the obvious cruelty involved in the humiliation that is built into the fabric of The Jeremy Kyle Show.

You know who you are

On Monday, an ITV spokeswoman said in a statement: “Everyone at ITV and The Jeremy Kyle Show is shocked and saddened at the news of the death of a participant in the show a week after the recording of the episode they featured in and our thoughts are with their family and friends.

“ITV will not screen the episode in which they featured.”

On Tuesday, Steve’s partner Ms Callaghan spoke to The Sun of her distress over her ex’s death.