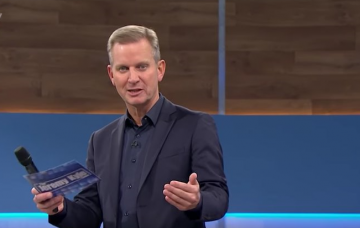 She was accused of "abandoning" her daughter too

On Friday (March 21), mum Donna appeared on the ITV morning show after her daughter contacted the programme makers in a bid to reconcile their broken relationship.

Read more: Jeremy Kyle fans in tears as mum whose baby was killed by boyfriend blames herself

Sixteen-year-old daughter Summer told host Jeremy that she felt abandoned after Donna allegedly slammed a door in her face two years ago.

She claimed the unpleasant incident happened after Donna and Summer’s father Scott split up.

In fact, Scott was also in the studio and things became heated as the exes came face to face and had a fiery showdown.

Scott accused Donna of cheating on him with another ex, Ian.

Scott said: “She’s a pathetic excuse for a mother, she walked out on her own daughter.

“She’s a liar, I was with her for seven years. We broke up because she’s a cheat. She went to Cyprus and had sex. She cheated on me with Ian.

While Donna didn’t deny the accusation, she spat back: “Where the hell did you get that from?”

Things got worse for Donna as another ex – this time her former best friend Sasha – entered the conversation and told a shocked studio audience that Donna had had a one night stand during a holiday to Cyprus.

Pretty bad, but much worse when you hear that Sasha lay ASLEEP in the same bedroom!

After the show aired, The Jeremy Kyle Show’s official Twitter account updated their 380,000 followers with the message: “Since the show, Donna and Summer accepted our help and have been attending counselling sessions to get their relationship back on track. We wish them well for the future.”

Would you appear on The Jeremy Kyle Show? Leave us a comment on our Facebook page @EntertainmentDailyFix and let us know what you think!