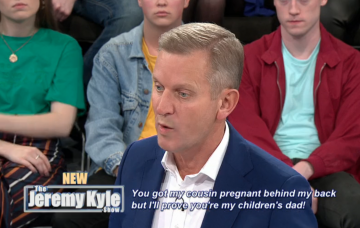 Obnoxious Samantha was also compared to a character from The Incredibles

Jeremy Kyle had viewers crying with laughter earlier today after he laid into an obnoxious guest, saying she looked like the love child of Elton John.

Samantha, appearing on the ITV programme in support of her brother Shane who had got two cousins – Laura and Katie – pregnant, was also compared to tiny Edna Mode from The Incredibles.

The mouthy sister made several brutal remarks herself before Jez turned his ire on her, including mocking Laura’s wheelchair-using father which left his daughter deeply upset.

She also hit out Laura by saying she looked like a “beached whale” and repeatedly dismissed remarks made to her by sneering: “Is it?”

Siblings Samantha and Shane were also teased for their matching camouflage clothing by the irascible host who joked they looked like X factor rejects.

“To me you look like Elton John’s love child but I could be wrong,” Jeremy fired back at the self-styled ‘gangster’.

He then later demanded she be removed from the backstage area as he tried to get some sense out of the preening Shane.

“Get the sister off! Put her in a creche,” he told a very large member of his security squad as Samantha skulked away, muttering her to herself as the studio audience jeered.

Those watching at home were tickled by Jezza’s comparison.

“What awful, awful specimens of people. Shameful,” said one viewer.

They continued: “Where do you get patience from Jeremy? 🙏 Elton John’s love child ? Not fair on Elton I think!”

Some fans even mocked up images showing animated character Edna in Samantha’s place on the show.

Despite Shane’s doubts, he was confirmed to be a DNA match for single mum Laura’s two kids.

However, it does not appear that Elton John was required to take any kind of paternity test.