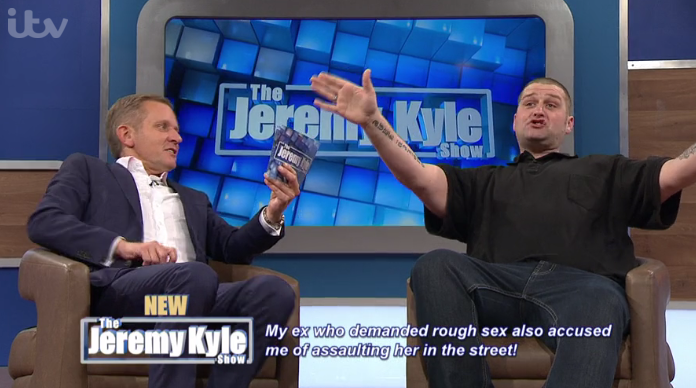 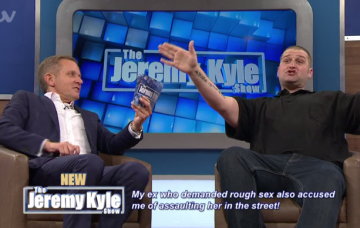 Most people put their chocolate wrappers in the bin...

Just when you think you’ve seen it all on The Jeremy Kyle Show, along comes something that makes your jaw hit the floor.

On today’s show, the presenter, 52, was talking to a man called Mark, who claimed that his ex-girlfriend had spread a rumour about him beating her up, and all because of a chocolate bar.

Mark explained that his former squeeze had started the whispers after he stole a bar of Galaxy from her.

But it was the revelation he came out with after that left fans of the show – and Kyle himself – stunned.

The segment – titled “My ex who demanded rough sex also accused me of assaulting her in the street” – made for uncomfortable viewing as Mark, Joanne and Joanne’s new ‘friend’ Sean launched into a three-way slanging match.

Mark labelled his ex “Shamu the whale” and mocked her bedroom performance, while Joanne made a joke about his manhood.

And security had to be called in as Mark and Sean squared up to each other.

But Mark had the joker up his sleeve as he dropped a bombshell about his ex that left the audience gasping.

When Jeremy answered that he does, Mark laughed: “You ain’t gonna like them now. Because she had sex with someone who wore a Toffee Crisp wrapper as a Johnny!”

Well, that left the presenter shocked, and it was a full 20 seconds before he was able to respond.

He quipped: “At least he wrapped it in something!”

And viewers at home were equally dumbfounded. One tweeted: “‘Used a Toffee Crisp wrapper as a Johnny.’ Just heard THAT…”

Another added: “Apparently, someone on #jeremykyle this morning has said they used a Toffee Crisp wrapper as a condom. That was Bounty go wrong.”

And a third viewer uploaded a picture of a Dairy Milk bar, alongside a tweet that read: “That reminds me, I need some new condoms.”

Joanne actually denied Mark’s bizarre claim, but the damage is done, and we’re not sure we’ll ever look at a Toffee Crisp in the same way again…