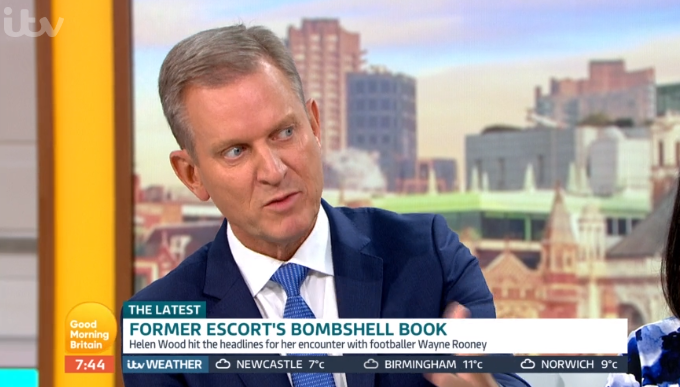 She's about to release a tell-all biography

Former escort Helen hit the headlines in 2010 after her relations with married former England captain Wayne Rooney were revealed.

She appeared on GMB today (Monday May 6) to talk about her new autobiography, A Man’s World, due to be released next month.

But tensions were soon raised when guest host Jeremy – a friend of Coleen’s – accused Helen of airing her dirty laundry and making his pal’s life hell.

“I’m not bringing it back up, to you it’s coming back up and to other people, but I’ve learnt to live with this. So if someone goes into a restaurant and asks me about this, that’s someone else bringing it up,” Helen said after Jeremy asked why she keeps bringing this subject up.

“It’s putting the record straight, it’s closure and more importantly, I want people to realise that the Wayne Rooney thing is a drop in the ocean. There’s so many other things. It’s about my life – it’s a biography.”

Helen hinted in the interview that she will name the four other multi-millionaire football players – as well as actors and a judge – she’s slept with.

This prompted Jeremy to say: “But you said you’re not bringing it all back!”

“How is it bringing it back?!” Helen replied angrily. “It’s there all the time for me.

“A super-injunction was brought out on me when I never had an intention… who am I naming? Please just bear in mind we’re going off what the media writes. It’s clickbait.”

“It’s about a ton of things,” Helen continued. “I can confidently believe now that women will be able to read this book – and this isn’t about men bashing, it’s not about me hating on men – it’s about why women do certain things.”

The host then when onto ask Helen if she hadn’t have slept with the footballer whether anyone would want to read the book.

“People who write biographies, have they all slept with footballers?” Helen asked.

Jeremy dug his heels in and asked again: “Would anyone publish your book if you hadn’t slept with Wayne Rooney?”

“Yes! Yes! People would still be interested in reading the stories I’ve never been able to tell, I don’t mean names,” Helen responded.

“My childhood, why I’ve done certain things, why I’ve behaved in certain ways. People are very quick to judge, but aren’t actually interested in saying, ‘Why did you do these things, Helen?'”

Jeremy then said: “I know her and I should think it messes her up.”

But Helen replied: “It can’t mess her up that much because she stays with him and he cheats on her all the time.”

Co-presenter Ranvir Singh said they had reached out to Wayne Rooney for comment and he’d declined, before insisting Helen shouldn’t speculate on their marriage.