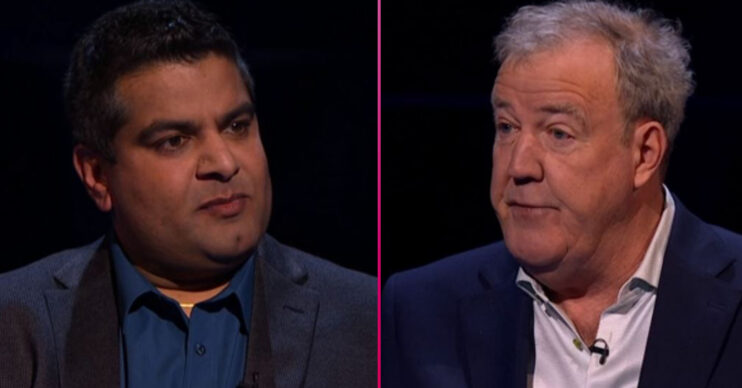 Jeremy Clarkson discovers connection to Who Wants to Be a Millionaire? contestant

Went on to joke contestant Mindy was 'sucking up'

Jeremy Clarkson was caught unaware on Who Wants to Be a Millionaire? last night (Saturday August 21).

The ex Top Gear presenter realised he had a family connection to a contestant as he introduced Mindy Dhanda.

But instead of taking it easy on Mindy because of their association, Jeremy still leaned on his customary banter as he took the mick later on in the game.

It turns out that Mindy – the final contestant in the last episode of the series – had a role in schooling Jeremy’s son.

However, their link apparently only clicked as Jeremy read through his preparatory notes as the show was being filmed.

Read more: Who Wants to Be a Millionaire?: Jeremy Clarkson admits he doesn’t know who Anne Hegerty is

Pausing as he read aloud, Jeremy said: “I’ve just seen in your notes that you’re a chemistry teacher who taught chemistry to my son.”

A surprised Jeremy went on to quip: “Well I shall try to be less of a bother to you than he was back in the day.”

How did Mindy react when Jeremy realised?

Smiling, the teacher jovially noted that Jeremy’s son had been “excellent”.

Jeremy, however, was having none of Mindy’s flattery.

And that is it for this series of #WhoWantsToBeAMillionaire, we’ll be back soon for more Millionaire fun! pic.twitter.com/gO5ABo3f2L

Jeremy Clarkson on Who Wants to Be a Millionaire?

Mindy had a good run of answering questions correctly before he needed to use a 50:50 lifeline for a question about the London 2012 Olympics.

However, he did go on to use his Phone A Friend lifeline when it came to his £64,000 question.

None of you know anything!

Mindy chose to consult with fellow teachers regarding the art question – but neither of his colleagues knew the answer.

Jeremy leapt on the opportunity to make a gag – and made a reference to his son’s exam results.

He joked: “I’m starting to understand now why my son cocked up his A-Levels.

“None of you know anything!”