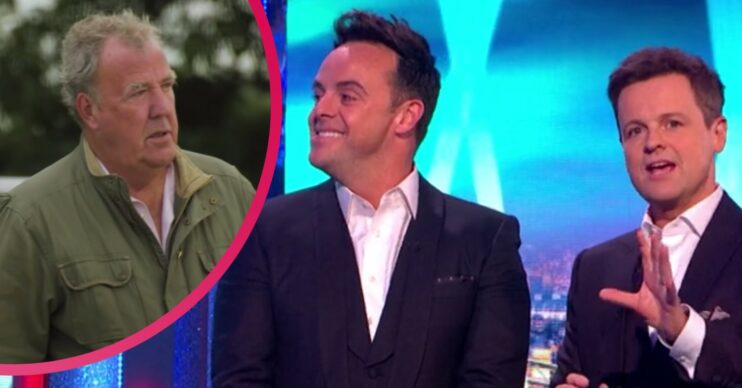 Some viewers reckoned he was referencing Ant's drink-driving conviction

But the ex Top Gear host riled some viewers with his greeting as he appeared via video link to discuss the skit.

And, while the Who Wants to Be a Millionaire? host seemed to be referring to Ant and Dec‘s roles in the segment, some of those watching at home suggested he was taking a swipe at Ant.

Why was Jeremy Clarkson speaking with Ant and Dec on Saturday Night Takeaway?

The Undercover prank targeted Jeremy with a group of fake protesters in scenes that left his car covered with soil.

The bogus demonstrators were also instructed to handcuff themselves to Jeremy’s vehicle.

Read more: The ultimate Ant McPartlin profile: Is he married, does he have a child and how did he become famous?

An unimpressed Jeremy later swore at actors posing as police officers before Ant and Dec revealed themselves.

However, the most controversial moment for some viewers came before the prank footage aired on TV.

What did Jeremy Clarkson say to Ant and Dec?

Welcomed to the SNT studio and speaking from his game show set, Jeremy seemingly made mention of Ant and Dec’s performances in disguise for the prank.

Oh look, it’s the driver and his mate.

But Ant appeared to smile rigidly in Jeremy’s direction before crossing his arms and looking off to his left in the seconds following the remarks.

One Twitter user remarked: “Blimey, poor Ant. Clarkson got the car driver dig in and you could see the moment Ant’s heart got ripped out. #SaturdayNightTakeaway.”

Another wrote: “‘It’s the driver and his mate.’ Did Jeremy really just make a joke about Ant’s drink driving?! #SaturdayNightTakeaway.”

A third person claimed: “Bit awkward between Jeremy & Ant after that.”

A fourth person pondered: “Did Clarkson actually make a driver and his mate joke at Ant after his incident before? Ant looked fuming! #saturdaynighttakeaway.”

“Oosh Ant looked to be positively seething when Clarkson said ‘the driver and his mate’ #Saturdaynighttakeaway,” claimed a fifth.

“Nah the way I SCREAMED when Jeremy Clarkson referred to Ant and Dec as ‘oh look it’s the driver and his mate’ #SaturdayNightTakeaway,” added a sixth

Read more: Declan Donnelly and wife Ali: When did they get married? How old is their child?

And a seventh person tweeted sarcastically: “Jeremy Clarkson to Ant & Dec: ‘Oh look, it’s the driver and his mate.’ Not awkward at all. #SaturdayNightTakeaway.”