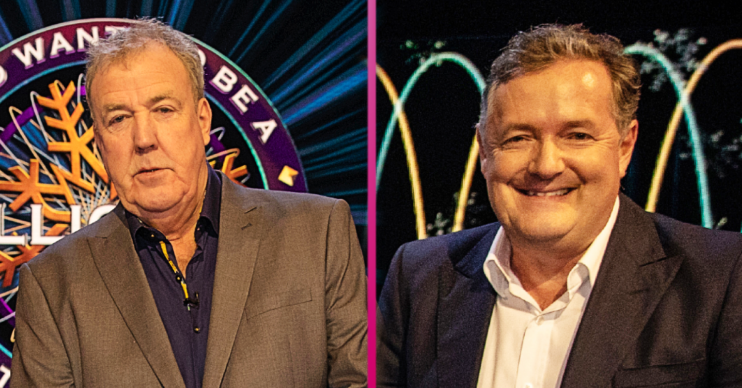 Jeremy Clarkson and Piers Morgan reunite on Who Wants To Be A  Millionaire? after feud

Piers Morgan and Jeremy Clarkson have reunited as the GMB host confirmed his appearance on Who Wants To Be A  Millionaire? this Christmas.

Piers, 55, took to Twitter to tell fans about his forthcoming stint in the famous chair.

Furthermore, he didn’t just say he’ll be answering questions, but he also said he did “well”.

What did Piers Morgan say about his reunion with Jeremy Clarkson?

In his tweet, Piers dramatically announced: “BREAKING: Yes, it happened.

“I’ve appeared on Celebrity Who Wants To Be A Millionaire, hosted by a man who once punched me in the head.

“It airs on Boxing Day (appropriately) and it went… well….”

He then left a link to his Daily Mail column, in which he detailed his 10-year feud with Millionaire host Jeremy.

Piers also said that his appearance on the show will raise money for Scotty’s Little Soldiers, a charity ‘dedicated to supporting the children of men and women lost while serving with the British Armed Forces’.

Why do Piers and Jeremy hate each other?

Piers and Jeremy famously fell out and had a decade-long feud.

It resulted in Jeremy punching Piers in the head at the 2004 British Press Awards.

In his newspaper column, Piers said that Jeremy introduced him by saying: “Please welcome our first guest… who is a truly awful human being!”

Suffice it to say, our subsequent ‘banter’ lived up, or down, to every expectation.

Piers went on to say: “Suffice it to say, our subsequent ‘banter’ lived up, or down, to every expectation of what might happen when two ego-crazed, rutting human stags, with a relationship laced in physical violence, finally clash on national television.”

Who else is on Who Wants To Be A Millionaire? this Christmas?

ITV also confirmed the other celebs who would be taking part in festive episodes of the hit quiz show.

Jeremy said in a statement: “We have a great line-up of celebrities for these two special episodes. Even I’d heard of most of them.

“There was Pru Leith who was warm and wonderful and great fun, and Piers Morgan who was… also on the show.”

Piers on What Wants To Be A Millionaire? is on ITV, Boxing Day (Saturday December 26) at 9.30pm.