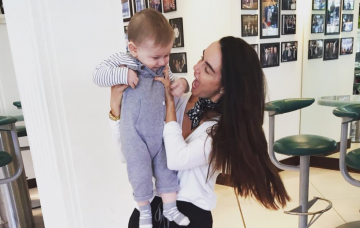 Jen Metcalfe speaks honestly about life as a mum

Don't expect her to sugarcoat it

Hollyoaks star Jennifer Metcalfe has spoken out honestly about the realities of becoming a mum for the first time.

The actress, who gave birth to son Daye Colmic last June, has admitted that having a baby was much harder than she thought it was going to be.

During an interview with The Mirror, Jen admitted: “It is really, really hard. You feel like you are constantly on a conveyer belt and I can never ever stop. Even when you have a night off, you don’t really have a night off.

“You are constantly worried about him and checking up on him. Sometimes that conveyor belt can get a bit too fast and it’s a bit much.

“The most challenging was the first two months. He didn’t stop crying with colic. It was constant and aggressive crying and it was a lot of the time.

“There is always something, whether it’s a tooth or a cold. We had a month where he had a cold, a cough, and zero sleep, we were losing the will.”

Jen plays Mercedes McQueen in hit Channel 4 teen soap Hollyoaks, and has just signed a new contract with the show as she prepares to return following her maternity leave.

But despite the sleepless nights, Jen of course is loving being mum to Daye…

Jen also revealed that she managed to get some well-earned time off from mum duties when she went to Majorca last month for a family holiday with her boyfriend, ex-Geordie Shore star Greg Lake, and Daye…

“Greg and I still have date nights. We went to Palma and actually had an adult conversation and drank wine and slept in. It was amazing.”

Are you looking forward to seeing Mercedes back in Hollyoaks? Leave us a comment on our Facebook page @EntertainmentDailyFix and let us know what you think!